Travel back and forth through time.

THEN: (Grand Falls) The first motorists to cross Canada, Thomas Wilby and Jack Haney, drove up along the Saint John River and then ran out of fuel near here, in the darkness, trying to make it to Grand Falls for the night. 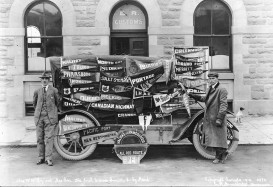 Thomas Wilby, at left, and Jack Haney at right

“It was already dark, and there were bad hills and a swamp paved with logs ahead,” wrote Wilby in his later account of the 1912 road trip. “To add to the charm of the situation, the petrol had chosen to exhaust itself at a moment when the car was climbing an ascent. To go upwards any farther was an impossibility; it was an equal impossibility to descend backwards, for the road behind was narrow and would lead us again into an ugly marsh that was covered with a rank growth to the edge of the wheel ruts…

“After some time, by dint of blowing into the tank to gain pressure, the car was started again. Two big hills surmounted on a thimbleful of remaining liquid power – it was a miracle! It was a miracle too that the unfortunate chauffeur did not burst his cheeks or succumb to asphyxia, for it fell to his lot to blow into the petrol tank every few moments of the remaining journey…

“How joyously we hailed every descent, every slight declivity, until swamp and hills were past and the small hotel of Grand Falls stood before us in silent welcome.”

Wilby’s complete account of the historic journey is a 292-page book named “A Motor Tour Through Canada,” but it’s in that second paragraph of the excerpt above that everything comes clear: Wilby, the English journalist, sat in the back of the supplied REO while his driver, Haney, did all the work. Wilby despised Haney because he was an American and not properly deferential; Haney loathed Wilby because he was a snob.

They were together for 53 days. Read my account of the road trip in Maclean’s here .

NOW: (Perth-Andover) The Trans-Canada Highway used to follow the Saint John river through the valley through New Brunswick more closely than today, but a hundred years ago, the road drove right along the bank. Now, the TCH passes by here a kilometre or so to the west.

Kendall Nissen walks out onto the porch of his store and points toward the road on the east side of the bank. “That used to be the CP railway line,” he says. “Now, do you think they’d have put a railway line along there if the river used to flood?”

No – the river has changed considerably in the last half-century, since the first dams went across it to create electric power. Since then there’ve been a number of floods in the town, including the deep waters of ’87 and ’93, which Kendall remembers from his 30 years of owning the general store. But none were as bad as the March flood of 2012. It’s the reason his store is still closed.

“We’ve had water in the basement before, and deep water too, but it’s never been above the floor. This year, it filled the basement and we had two foot of water on the main floor. It’s been 12 weeks now that we’ve been fixing the store and there’s another month or two left before I can reopen.” 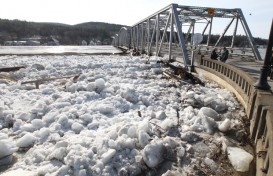 The ice jam at the Perth-Andover bridge in March

There’s no possible insurance for flood damage, he says, so he’s been doing most of the work himself with his son-in-law, a carpenter. He’s applied for compensation through the provincial government but hasn’t heard anything yet; the cost for repairs is coming out of his savings.

Who’s to blame? He puts the responsibility firmly on the dams.

“The river never used to flood. When they put the dams in the river, they should have done their research first but they didn’t know what they were doing. It’s great to have power, but it shouldn’t come at this cost. I’ve lost all my equity now – my retirement went down the river.” 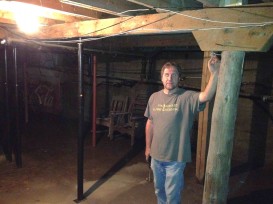 54-year-old grandfather is optimistic for the future, though, and has no plans to move.

“Someday, there’ll be an alternative way of creating power. I don’t know what it will be, but it will be found. I have no doubt my grandchildren will see this river again, but I don’t know if I will. It’s beautiful on a sunset – I just want my river back.”

SOMETHING DIFFERENT … (Saint John) Bricklin cars are one of New Brunswick’s most memorable failures, but Mike McCluskey loves them anyway. 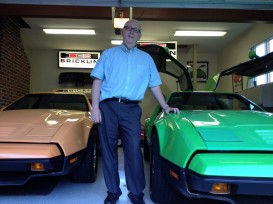 Mike McCluskey, with two of his three Bricklins

The gull-wing fiberglass “safety vehicle” was made for a couple of years in the mid-’70s in Saint John, N.B. The company was founded by smooth talking auto executive Malcolm Bricklin, who brought Subarus to North America (good) and went on to import Yugos (bad). The history of the company is very well documented: the Bricklin owners’ club will tell you about the cars and Wikipedia here will tell you about the remarkable man.

But if you want an indepth chat, Mike’s your man. He owns three of them, and will barely pause for breath recounting history and reason and trivia about the vehicles. Why are their colours uneven? Because they’re not painted, they’re plastic covered and the plastic fades in the sunshine at a different rate (aficionados look for these things). Why do the headlights go up and down separately? Because they’re vacuum powered and there’s only enough vacuum strength available for one at a time – it’s known as the “Bricklin Wink.”

There’s more – there’s lots more. I’d still be there now except Mike, a lawyer, had another commitment to attend. But before I left, he let me drive his “safety green” car around the wide block where he lives, just to get a feel for it. And it felt … different.

“I could have got a DeLorean, I could have got a Ferrari, but then what are you going to tinker with?” he said. “There’s always something breaking, but it’s simple enough that I can fix it. And I can’t get out of a gas station without somebody asking about it.