Day 23 on the Trans-Canada: Pitstop at the naturist campground

THEN: (Montreal) Quebec was the last province to agree to build the Trans-Canada Highway, signing on after holdout Maurice Duplessis died in 1959 and was replaced as premier by the federalist Jean Lesage. The current stretch of Hwy. 20 that runs between Montreal and Quebec City is known as the Jean Lesage Autoroute to acknowledge his contribution, though the original TCH in 1962 followed the more scenic Hwy. 132 along the St. Lawrence’s south shore.

As part of the deal, Lesage persuaded the federal government to build the Louis Hippolyte bridge and LaFontaine tunnel, which is where today’s Trans-Canada crosses the river. As Daniel Francis explains in “A Road For Canada,” the tunnel was a challenge for engineers:

“They couldn’t dig through the thick mud of the river bottom, nor could they bore through the deep bedrock. The solution was a unique, pre-cast concrete tunnel. Sections were fabricated on land, then floated out onto the river and sunk, piece by piece, into an underwater trench. Once in position the sections were joined and the tunnel was done…

“The Lafontaine bridge-tunnel exemplified the spirit of innovation and expansion that were the hallmarks of Quebec’s Quiet Revolution of the 1960s.”

NOW: (Montreal) The Trans-Canada Highway splits here in Montreal, heading both north on Hwy. 15 toward Val d’Or and west along the more traditional route to Ottawa.

This four kilometres of Hwy. 40/15 is probably the most heavily travelled section of the entire TCH: every day, an average of 310,000 vehicles merge along the two highways. So, of course, it’s under construction, which includes replacing the overpasses.

Montrealers probably wouldn’t mind so much except that the current section of road that’s being repaired was only fixed up fairly recently. The province’s roads are in a generally poor state of repair thanks to years of neglect, highlighted in 2006 when the Concorde Overpass at Laval collapsed and killed five people. Since then, Quebec has promised almost $4 billion for road work.

SOMETHING DIFFERENT … (DRUMMONDVILLE) The sign with “the three little bums” has been beside the highway for as long as my friend Costa can remember. It’s not really something you expect to see, so we dropped in this morning to visit the Centre Naturiste Domaine Soleil de l’Amitie.

Owner Roland Morin was happy to talk to us. He and his wife opened the nudist resort 25 years ago and on a warm summer’s day, it can be host to more than 200 people. Today was not a warm summer’s day, however: it was quite cool, and threatened rain. Nobody, not even Roland, was naked. 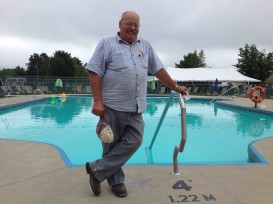 “This is the only four-star naturist campground in Quebec,” said Roland. “There are three others, but they don’t have what we have,” which includes a lake, two swimming pools – I saw the volleyballs – and a restaurant and bar. Bikinis and swim suits are not allowed, just as single visitors are prohibited, only families or couples.

“Once you come in, you register and if it’s warm, within an hour you’ve got to be naked,” said Roland. “We’re not all models, by any means, but you really do get to know a person when they’re naked in front of you.”

It wasn’t warm today, but that didn’t stop Costa and myself … 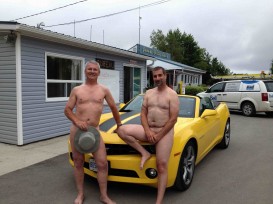