THEN: When Premier Joey Smallwood drove west from St. John’s in 1965 to greet Prime Minister Lester B. Pearson, who was driving east from Port aux Basques, they met just outside town here at the halfway point of the fully paved Trans-Canada Highway. In doing so, the TCH was declared complete across Newfoundland. “We finished this drive in ’65,” declared the signs and posters. “Thanks to Mr. Pearson.”

As I recounted in yesterday’s blog, Pearson agreed to pay 90 per cent of the cost of the road’s construction in order to get it finished while he was in office, and the province set to with vigor while Smallwood knew the funds were available. In appreciation, a monument was erected at the halfway point – a rock pillar roughly 25 metres high – and it was named “Pearson’s Peak” to commemorate the federal generosity.

But there’s nothing there now. Nobody here is quite sure what became of it. Long-time residents recall that it fell into disrepair after the two back-slapping Liberals left office; it became unsafe, with pieces of rock sometimes falling from it near the cars that were parked by amorous couples. There was nothing else to do there, after all – no picnic area or green space, just a circle of asphalt surrounded by bush with a pillar in the middle, about 100 metres up from the road.

The province chose the cheaper option of dismantling it instead of repairing it; again, nobody is quite sure when, though it was probably 15 or 20 years ago. The entrance to the paved drive was dug up to prevent cars from going in, and aside from some rubble and firewood sticks, there’s nothing whatsoever to mark the spot.

What happened to the bronze sign on the peak? Apparently, it was found at a landfill site, but where it went then, no one can – or will – say.

NOW: There are signs all along the highway in Newfoundland warning of moose on the road. I can’t recall seeing a single one, despite driving through both national parks and covering more than 2,000 km on the island, both east and west.

Michelle Higgins also doesn’t recall seeing a moose recently, though she surely did early last month when she was driving in the evening from her home at Norris Arm to work at Gander. I dropped in to see her this morning, so let her tell the story: 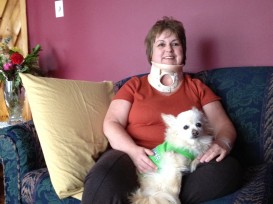 Michelle Higgins with DJ, who's a lot smaller than a moose

“I remember looking at the clock and I seen 7:28 on the clock. The police officer said after, that must have been the time that I hit the moose. The next thing I know, I was pulling into work’s driveway. I remember getting out of the car, and I remember my co-worker coming up and putting her arm around me, and asked me if I was OK, and I kind of looked at her and asked her, ‘well, why wouldn’t I be?’ And she said, ‘Michelle, you’re bleeding.’ She said, ‘look at your car – were you in an accident?’ And I said ‘no, I wasn’t in an accident,’ and she said, ‘did you hit a moose?’ And I said, ‘no, I never even seen a moose, let alone hit one.’ And she said, ‘look at your car,’ and when I turned around and looked at my car, I couldn’t believe it.” 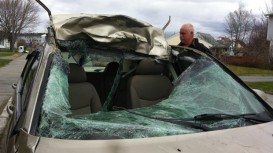 After the collision with the moose.

The windshield was smashed in and the roof peeled back “like a sardine tin.” Higgins is now famous as the woman who drove more than 30 kilometres along the TCH in an open, wrecked car, with no recollection whatsoever of hitting the moose that police found dead on the road.

She’s lost count of the journalists who’ve found her on the phone in Norris Arm; she’s not in the directory, though there are plenty of Higgins who all know each other. New York, Chicago, London – they’ve all been calling. “My cousin is in South Africa, and she saw it in the paper there,” she says. They’re all intrigued that she would have kept driving, and by all accounts of the few people who noticed her, driving quite responsibly.

She’s off work now from her job as a behavioral therapist because two of the bones in her neck are broken and she must wear a brace to help them heal. As well, she cannot lie flat without becoming nauseous, and she’s booked for a third MRI in a couple of weeks to check her progress. It hasn’t stopped her from being driven on the Trans-Canada, though.

“The first time I drove out there, I had knots and butterflies in my stomach, thinking that it would all come back to me, but I didn’t remember a thing,” she says. “Maybe it’s good that I don’t remember. I’ve seen maybe 10 moose in 10 years, on the road, and then I went to St. John’s the other day with my son and on the way back, we saw three moose. I wasn’t worried.”

SOMETHING INTERESTING… It’s been raining all day. ALL DAY! I haven’t seen the sun in more than a week. And it’s cold: 7 degrees at most. So much for driving a convertible.

There’s no point griping about this to Newfoundlanders though. “Aye, it’s some terrible ting, but dat’s de way she is,” said my host this morning. They’re calling it “Juneuary.” Apparently, last June it rained 23 days of the month. People here are hoping this summer will be better and are quick to say that April and May were warm and pleasant months. And the weather is good right now in Labrador, apparently. 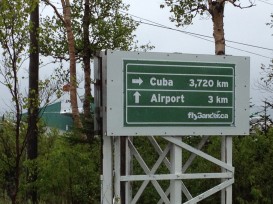 It's got to be warmer in Cuba, or anywhere.

All of which makes this sign near Gander’s international airport all the more appropriate. And if it pointed to Goose Bay instead of Cuba, that would be fine too.