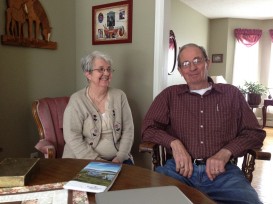 THEN: Lloyd Adams is “on the light side of 77,” and when I meet him, he and Audrey are celebrating their 48th wedding anniversary. But before they married, Lloyd spent years in the bush, surveying the future Trans-Canada Highway across Newfoundland.

“I got the job straight from school and stayed for 13, 14 years,” he says. “I learned everything on the job. Started as an engineer’s assistant, holding the tape, then worked my way up to using the instruments and plotting the road. We took it for granted back then and it was just a job, dealing with the blackflies, drinking water out of a boghole.” 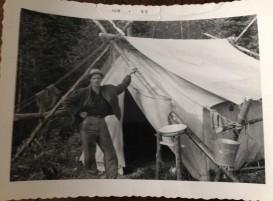 In 1955, Lloyd Adams was an engineer's assistant

He pauses, and then he says: “We didn’t realize it at the time, but we really were pioneers.”

There was no complete road across Newfoundland when he began in the mid-’50s. From Clarenville to Gambo, cars had to be carried by train, on the rail-car ferry. Lloyd would trek into the bush with a team of half-a-dozen surveyors for weeks at a time, hauling their own supplies and building their own camps. When they’d surveyed five kilometres of potential road, they’d pull up the camp and move it the five km to the start of the next leg, and begin again.

At least they had their own cook, and he didn’t have to do the heavy work – the clearing of the survey lines was done by another team of six men, equipped only with axes.

“It was tough land to work on,” he remembers. “You’d get to a pond and the construction crew would have to drain it and fill it all in, or to a rock and have to blow through it. These days, you don’t even notice when you’re speeding past.”

He pauses again, and then: “Now we have a four-lane highway and it only takes 45 minutes to get to Wal-Mart. I guess that’s progress.”

NOW: There are two words that describe today: Moose, and monsoon. Not enough of one and too much of the other.

You want to know what I think of moose, and the province’s attempts to prevent cars colliding into them? Watch this video. 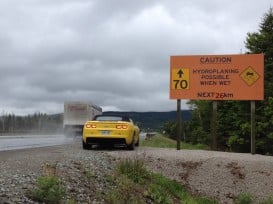 And as for the rain, the drive from Grand Falls was just a slog along a soaking wet, spray-filled road. Any scenery worth seeing was hidden behind a wall of water, or of cloud, until I got to the west coast. The Trans-Canada Highway here is a slippery road, too: more often than not, there were two channels of rain water where the asphalt has been depressed into shallow tracks by years of vehicles driving the same point in the lane.

Where there was standing water, which was frequent, the wide and sporty tires of the Camaro slid from side to side, jerking the car. Wider tires mean there’s less weight concentrated on the same area of rubber than regular tires, which does not make for a relaxing drive. I don’t really want to be calling the CAA for a tow truck out of the ditch in my first week on the road – give me moose any day.

SOMETHING INTERESTING… How do you market the unmarketable? Somebody at Gale’s Septic Pumping north of Port aux Basques found a way. 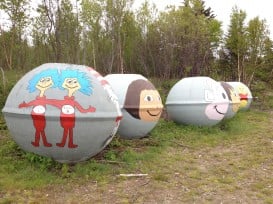 Yes, they really are septic tanks

With a captive audience driving past all day long, these 1,000-gallon septic tanks are lined up beside the road to greet drivers.

And no, I didn’t check if they were empty.