Day 5 on the Trans-Canada, Rose-Blanche, NF

THEN: You get to Rose-Blanche by turning right instead of left when you leave the ferry at Port aux Basques, or by carrying on an extra 42 km when you get to the western end of the paved Trans-Canada Highway in Newfoundland.

That’s what author Edward McCourt did when he drove the TCH in 1963. The ferry was fully booked, so he and his wife were forced to spend an extra day on The Rock. Here’s what he had to say in his book, The Road Across Canada:

“The thirty mile run by car from Port aux Basques  to Rose Blanche at the end of the road is one of the most novel and spectacular in all Newfoundland. The road, a new one, is surprising good and safe considering that much of it appears blasted out of solid rock…. 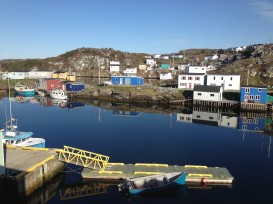 “Rose Blanche more than fulfills our dreams of what a Newfoundland village ought to look like … Houses perch on the point and the off-shore rocks and cling to the cliff faces rising from the water’s edge. The parts of the village are bound together by elevated wooden sidewalks snaking over water and rock and occasionally a substance that might pass for land. Since most places in the village are accessible mostly by boat, Rose-Blanche suggests a Venice in miniature – if you can accept a fish-packing plant for a doge’s palace and a rowboat for a gondola.”

Not much has changed. Want to see what the road and the community looks like now? Watch my time-lapse video here and drive with me from Port aux Basques to Rose Blanche in less than a minute.

NOW: I stayed here last week on my first night in Newfoundland, after reading McCourt’s description, and met Lynne Sawford and Norm Gentner, a couple from Petawawa, Ont., who run the excellent Rosesea guest house in town. Just as well: it’s the only place in town to stay, and it’s one of those hidden secrets of the province. They took me then for a walk to the granite lighthouse that is the community’s only tourist attraction, and pointed out the tiny community of Petites across the bay, about three kilometres east of here and past the end of the road. 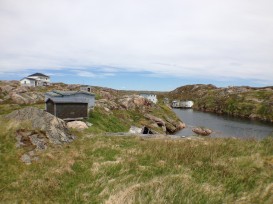 The community of Petites is now abandoned, officially

I was intrigued by the distant houses, empty now since the government resettled the place in 2003 and forced its residents to move. Lynne arranged for a boat to take me out there for a poke around on my return, which was today.

I swallowed a Gravol, got into the small boat and held on gamely to my life preserver; men here usually refuse to wear them on the water, despite very few knowing how to swim.

It took 20 minutes to get across the bay and I was dropped at the old wharf. Petites used to be a community of a couple of dozen houses, complete with church, school and fire hall, but the buildings have fallen apart in the last nine years they’ve been empty. I walked through a number of them over the next couple of hours, shooting video and saying wistful things into the microphone, until I walked down an overgrown path and heard voices. 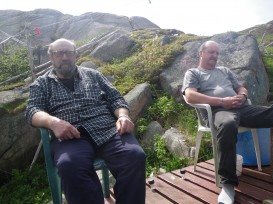 It was Austin Bennett chatting with his lobsterman friend Wayne Spencer. Bennett was born and raised at Petites and never really left. “I was the last one to sign the papers,” he told me, sitting on the porch of the house he still owns. “I took the money the government gave me and bought a place in Rose Blanche. The family’s there, but I still come here to lobster fish in the summer.”

It’s like a cabin in the woods, he said, except that it’s on the ocean and accessed only by boat. His Petites home has a generator and a wood-burning stove, and inside it looks like any other cottage. A couple of other people have also maintained houses in the settlement and come to stay every summer.

“There’s nothing to stop me being here, so why would I leave?” he reasoned. It’s a base for lobster fishing, and a getaway when the hectic pace of Rose Blanche, population 600, grows too much for him. Is he nostalgic for the old community?

Not really, he says. There’s no fishing anymore, except for the lobster that he takes from around the harbor, and most of the community had already moved away by 2003 to find work elsewhere – maybe a dozen people were left.

Back in Rose Blanche, I tell Norm and Lynne about my bittersweet afternoon at Petites, and I ask them if they think their adopted town will ever be abandoned. They’re both sure it will. Already, most of the men work in Alberta, and the women also work elsewhere.

“I don’t know if this will last 30 years,” says Norm, and then Lynne cuts in: “But we’re going to make the most of it while we can – while it’s still here. It’s too wonderful to leave.” 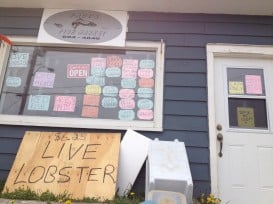 SOMETHING DIFFERENT… In Newfoundland, little goes to waste and that includes food. This Port aux Basques fish shop leaves out nothing that could possibly be eaten – including cod and halibut cheeks, whole squid and squid tubes – though not by me.