Decline and development of the prairie

THEN: (Ernfold, Sask.) This rural town, 68 kilometres east of Swift Current and with a population of 21, is surely the only community in the country that lies in the Trans-Canada Highway.

Ernfold, at the "A" marker, lies between the lanes of the Trans-Canada

Warren Beach has lived here almost all his 55 years. He remembers when the road was a single two-lane stretch of asphalt, and then when it was twinned in 1973 to become a four-lane highway. But to avoid razing the town that lay to the south of the road, the eastbound two lanes branched way off to the south, as far as three kilometres away from the westbound lanes. Much of Warren’s 3,600 acres of ranch land lies between the opposing lanes of highway, as does the town itself.

“It makes it kind of novel,” he says. “You think of it as like the railway once was: it was the link of Canada, the lifeline of Canada. That’s what the Trans-Canada is now. We’ve always felt here that we’re kind of close to civilization, and it’s because of that highway. You go 15 miles south of here and you feel you’re in the middle of nowhere, but the Trans-Canada makes you feel less isolated.” 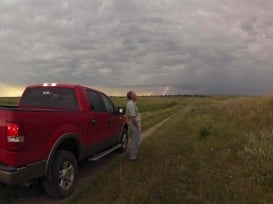 Warren Beach, on the track that used to be the main provincial highway.

Warren took me in his pickup truck along the track that formed the original graded gravel road across the province. It’s the road that Perry Doolittle would have driven in 1925, when he wrote enthusiastically about the gravel and cinders that Saskatchewan spread on the sticky gumbo of its clay highways, and that Alex Macfarlane would have driven in 1946 to win the Todd Medal, before it was replaced in the early 1950s with the construction of the new Trans-Canada.

We spoke for a long time while a prairie storm approached about the decline of western rural communities, and the effect of the railway and later highways on its residents. Ernfold used to be a thriving town of as many as 300 people, but it’s now rundown and without facilities – just a few homes among the boarded-up houses between the Trans-Canada.

“It wasn’t the highway that did that to Ernfold,” says Warren. “The factors that killed this community were in place long before. It was the ongoing development of the West. Technology has changed the way we live. We don’t need communities every nine miles any more. Everything is more centralized now, and it’s centralized in the city – that’s where the heavy capital comes from that services the rural communities. Rural life is changing. But it’s all ongoing; it’s still going on.”

NOW: (Moose Jaw) The 60-kilometre stretch of Trans-Canada between Regina and Moose Jaw was renamed the Highway of Heroes in a ceremony last November. It’s now one of five provinces to honour Canadian soldiers. 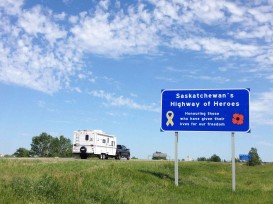 The most recent was New Brunswick, which decided to give the name to its entire 900 kilometres of TCH earlier this summer. I wrote about it earlier in this journey in this blog post.

However, I still think this cheapens the original Highway of Heroes, which is the 150 kilometres of Highway 401 from the air base at Trenton, Ontario, to the coroner’s office in Toronto. This is the stretch of asphalt along which the hearses travel that contain the bodies of the fallen soldiers who are being delivered home, and people line the road’s bridges to pay their respects whenever a procession passes.

No such thing happens on the TCH in Saskatchewan. Sure, the provincial government stated in a press release for the renaming that both Regina and Moose Jaw “were important bases to the Air Training Program during the Second World War and an active military presence in both cities remains today.” But why not follow Nova Scotia’s example and honour our soldiers by naming the TCH simply as a Veterans’ Highway? This would allow the Ontario portion of road to be accorded the unique recognition it deserves. 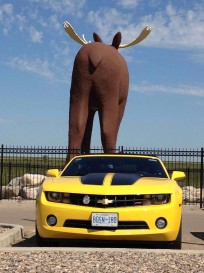 SOMETHING INTERESTING … (Moose Jaw) Tristan and I stopped at the giant moose on the edge of town to find out if it really is anatomically correct. It is, sort of, though nothing that a male moose ought to be too proud of.

While there, we met Jack and Karen from Syracuse, New York. They were holding onto a copy of today’s Regina Leader-Post, in which there was a story about this journey. (I worked at the Leader-Post in the summer of 1988, so it was a little strange to be the person interviewed for the story.) They had driven out to the Pacific on American roads and were now returning along the Canadian highway.

“This is a good road – we’ve got no complaints,” they said. I forgot to ask, though, how they fared in the Banff area, where the Trans-Canada was closed just a few days ago by a mud slide and traffic was stranded on the road overnight.

SOMETHING FROM TRISTAN, 12 … (Swift Current) Today I realized the true meaning of boredom. Today, I was stuck in the car by myself for about an hour. (Dad’s note: He refused to come along when Warren Beach and I invited him to drive with us to the nearby track that was once the main provincial highway.) 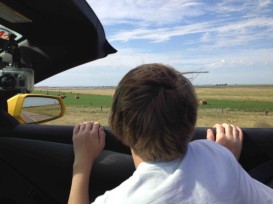 All I had was my dad’s iPhone that didn’t have like any good apps on it. I was basically just scanning bar codes on magazines with the scanner app the whole time. I eventually fell asleep for about 10 minutes I think when my dad finally arrived. But other than that, today was pretty ok.