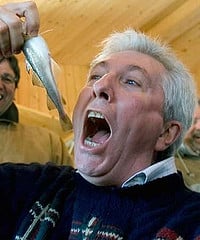 About two years ago, Bloc québécois leader Gilles Duceppe filled the air with pithy quotes about the Globe and Mail’s coverage of the Dawson College shootings. Referring to erstwhile Globe writer Jan Wong’s spurious suggestion that Kimveer Gill shot up the place in part because of Quebec’s language laws, Duceppe (rightly) pointed out the crude politicization of tragedy by Canada’s National Newspaper™. “It’s unacceptable, it’s deplorable and it’s shameful for a paper of such importance,” Duceppe told reporters of the time.

So guess who piped up with a crude politicization of this very tragedy yesterday? Step right up, Mr. Duceppe.

He kicked things off by comparing Stephen Harper to Dubya, and suggested a Conservative majority will turn Quebec into Texas-Of-The-North, complete with guns, war and, one assumes, dust bowls. The Bloc québécois, Duceppe continued, is the only party that can prevent a Conservative majority during the next election, thereby “avoiding other tragedies like the Dawson and Ecole Polytechique shootings.”

All’s fair in love and elections, I guess.