Driving into the Pacific

NOW: (Vancouver) The Pacific at last! 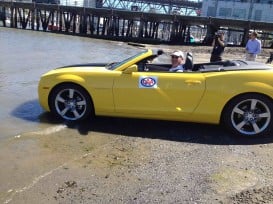 Dipping into the Pacific

I’ve been dreaming of this day ever since leaving the Atlantic slipway at Petty Harbour in Newfoundland.  The CBC came out to film me then, and the CBC came out again today to film our arrival when we dipped the wheels in the ocean 52 days later, near Kitsilano. The weather was warm and sunny and everything went so smoothly I was worried that disaster was imminent, especially as we drove through endless construction and the heavy traffic of a long weekend – but so far, so good.

Of course, we’re not quite there yet. The Trans-Canada Highway continues west from here over the ferry to Vancouver Island, and down to Victoria. We’ll be leaving for the island on Monday.

THEN: (Vancouver) Thomas Wilby and Jack Haney drove into Vancouver on Oct. 14, 1912. Their arrival was keenly anticipated and dense crowds welcomed them to City Hall. 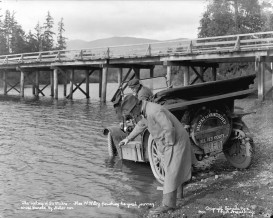 The reporter from the Vancouver Sun wrote glowingly that the REO was “stained with the evidence of strenuous travel, covered with mud and oil and grease, but with every component part performing its allotted function regularly and efficiently as the day it left the Nova Scotia coast, the Halifax to Vancouver Reo automobile, bearing the banner of the Canadian Highway Association with Mr. Thomas Wilby at the wheel, drove up in front of the Vancouver hotel at six minutes to four o’clock yesterday afternoon. The total distance travelled was 3,900 (miles).

“No tour by motor car has caused more widespread interest. The difficulties attendant upon the expedition were almost incalculable. Mountainous, unmarked country had to be traversed, water courses crossed where there were no bridges, country travelled where there were no trails or paths, and in many cases railroad rights of way and grades taken in lieu of roads. It meant the survival of the fittest. A slight defect in mechanical construction, a moment’s relax of vigilance in driving over dangerous trails, and the object of the tour would have been at naught.

“Wilby and his mechanician Mr. F.E. Hanley (sic), were both deeply tanned by exposure to all sorts of weather, but beyond that there was little to indicate either in the crew or the car the magnitude of the undertaking or the unusual nature of the trip.”

SOMETHING DIFFERENT: (Vancouver) We were met in Burnaby by Lorne and Irene Findlay and their son Peter, who gave us an escort to the ocean in their 1912 REO and 1962 Plymouth Valiant. 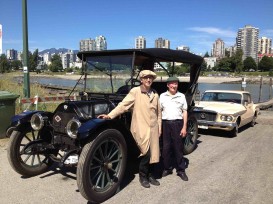 The REO is the exact same model of vehicle that Wilby and Haney drove across the country a hundred years ago, and in 1997, the Findlays drove their car in a re-enactment of the journey from Halifax to Victoria. They were accompanied by John Nicol, now a journalist with the CBC based in Toronto, who wrote about the trip in his book The All-Red Route.

The Findlays’ REO attracted all kinds of attention on the streets of Vancouver as we followed it in to Vanier Park, where we dipped the wheels into the water of False Creek, under the Burrard Bridge. It had to be hand-cranked to start but once running it ran smoothly all the way – though the smell of the exhaust reminded us that it wouldn’t pass any emissions test these days.

It was quite something to follow the old car, and to recognize the challenge that faced Wilby and Haney, especially on the rough mud and sand roads and steep hills that set them back time and again.

When the pathfinders drove across Canada in 1912, the car ran fairly well with few incidents of reliability; when the Findlays drove the same route in 1997, they didn’t even get a flat tire.

SOMETHING FROM TRISTAN, 12: (Vancouver) Today we finally reached Vancouver! I am so happy now because the whole trip from here on we will be in the cities (my playground). 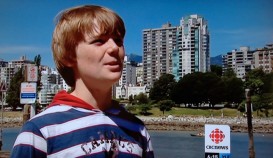 We got interviewed today by CBC and I think it went a lot better than before (in Sudbury) because I knew what to say because I had been thinking up sound bites.

So far Vancouver has been great and hopefully it can only get better!!!!!