Fears arise that Chinese bird flu may be transferred between humans 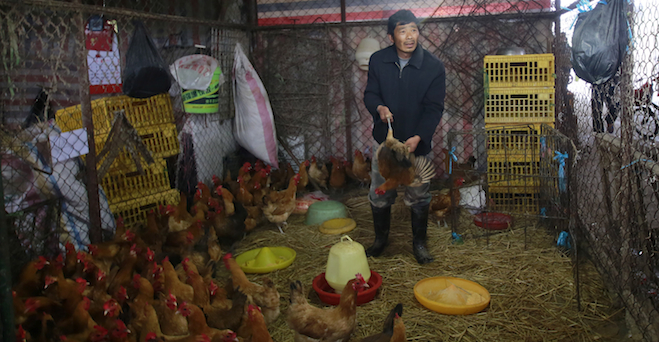 A worker catches a live chicken at a poultry market in Shanghai, China on Friday, April 5, 2013.(AP)

A new strain of bird flu that has killed 17 people in China and infected at least 82, may have been transferred from human-to-human, officials said.

Up until now, officials in both China and at the World Health Organization have urged calm, saying that the H7N9 virus only appeared to be transferred from a bird to a human and not from human to human.

One of the families that is causing the concern is the first reported case, a 87-year-old man who died of the virus. He may have transmitted the virus to his two sons, Chinese news agencies report. “Further investigations are still under way to figure out whether the family cluster involved human-to-human transmission,” Feng Zijian, director of the health emergency center of the Chinese Center for Disease Control and Prevention, told reporters. He went on to say that “human-to-human transmission, in theory, is possible, but is highly sporadic.”

Chinese officials also said 40 per cent of those infected were not able to confirm that they had direct contact with poultry before becoming sick.

A World Health Organization official confirmed Wednesday that they were also investigating the case of two young boys in Beijing, who may have infected one another. “Even if two family members are positive, it is not necessarily the case they got it from each other. They may have gotten it from the same bird,” Gregory Hartl, a spokesman for W.H.O. in Geneva, told The New York Times.

While the number of cases remains small, and the World Health Organization has not recommended any travel advisories to China, the bird flu is having an effect on the Chinese economy, particularly on poultry companies, reports Forbes. Earlier this month, officials killed more than 20,000 birds at a live poultry market after some of the birds tested positive for the H7N9 virus. Other live poultry markets have also been shut down.