Forget bribing Quebecers with their own money, scare them instead 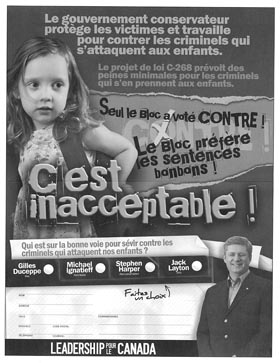 I guess the Conservatives figure they can’t do much worse in Quebec so they might as well go whole-hog on the gutter politics. There’s really no other explanation for their decision to mail a bunch of brain-dead pamphlets to constituents in Bloc-heavy ridings accusing Duceppe’s troops of being “opposed to the protection of children,” a reference to the Bloc’s opposition to a private member’s bill that would set a mandatory minimum sentence of 18 years for those convicted of trafficking in minors:

On the first page, we see a young girl and slogans. The back page features an empty swing seat in a park. In the distance, a man is walking away, holding a child by the hand. All of it is set against a murky background that leaves the rest to the imagination.

There’s already a chasm between the Tories and Quebecers when it comes to all this “tough on crime” nonsense. Trying to goad the Bloc into a spitting match over who wants to send people to jail for the longest amount of time isn’t likely to bridge it. Quite simply, the Bloc has no reason to take the bait.

That’s not to say there’s nothing inherently offensive about the ads—and this is where the Bloc might score some points if they can successfully spread the word about them:

The missive to Quebec was sponsored by Conservative MPs in Ontario and Manitoba. It was paid for with Parliamentary allocations, i.e. taxpayer funds.

Assuming there’ll be a fall election, that gives the Tories about four months to get a clue about Quebec. For their sake, I hope they’ve got a Plan B.