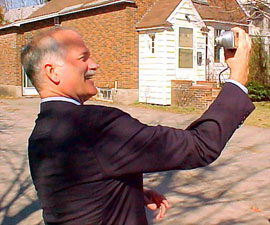 Jack Layton being Jack Layton, though not in Westmount.

The other night I was in a Westmount adjacent establishment for a drink-poo, and I barely had to strain my neck to see that sizable bits of the NDP brain trust, Jack Layton and noted Outremont socialist Thomas Mulcair, were seated at the table behind me. NDP Westmount-St. Louis Ville-Marie (thx Joffré) candidate Anne Lagacé Dowson joined them later. As usual, Jack was dressed as though he’d robbed Mountain Equipment Coop earlier that afternoon and, as usual, ‘Prozac’ Jack was happy as can be (go here for Aaron Wherry’s take on just why that may be.) The whole thing wrapped up with Jack telling Lagacé Dowson to stay the course – that is to say, continue the veritable orgy of door-to-door glad-handing to which Lagacé Dowson has submitted herself. The woman, I’m told, has been a machine, and it shows: she has outdone both her lawyer and astronaut opponents in terms of face time and media coverage. She has done better than expected against her main rival, the aforementioned astronaut Marc Garneau. Meanwhile, her adopted party is, if not exactly flush, then at least firing on all windmills.

And to think, it might all be for naught.

It is doubtful this by-election, or the the one in Longueuil or Guelph, Ontario, will even take place. In all likelihood Harper will drop the writ beforehand, and those seats will be in the offing in a general election. On the face of things, this might not seem to be a big deal for Jack Layton et al., since the NDP’s position as the real alternative to the Conservatives will play just as well during a by-election than during the real thing, right?

Not so much. By-elections are ephemeral things that are usually won or lost less by the party than by the candidates themselves. They allow voters to indulge in flights of fancy with the knowledge that a mistake can be expunged during the next general election. Look at Mulcair’s by-election win in Outremont last year: Incredibly popular here in Quebec, Mulcair benefitted from acres of good ink after his very public falling out with Jean Charest. His Liberal opponent, meanwhile, was a little-known bookish intellectual who had about as much presence as, well, a little-known bookish intellectual. Add to this a soupçon of organizational jackassery by the Liberals and voila!, an NDP foothold in the Pretty Province. As someone who genuinely amires what Mulcair has accomplished, though, I worry about what will happen when he has to go up a star Liberal candidate in the next election.

All is to say that a real election, as opposed to a by-election, doesn’t bode well for the NDP in Westmount-Ville-Marie. Westmounters are a famously Liberal but conservative bunch; about the most revolutionary thing they’ve done in the last 20 years is eating their cucumber sandwiches with the crusts intact. And while the riding is far bigger (and infinitely more diverse) than just Westmount, there is a reason it was represented by a Liberal for upwards of half a century. In Westmount-St. Louis, voting for Lagacé-Dowson in a by-election would be a proper enough deviation to the rule; like it or not, though, the Liberals will long be the go-to protest party against Stephen Harper’s Conservatives – whose support wobbles at around 20 percent on the island.

At least she can go back to her day job.