Harper and Dumont, sitting in a tree, k-i-s-s-i-n-g 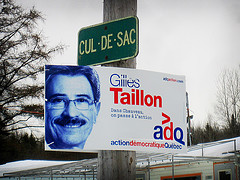 Paul and Kady have an interesting back-and-forth going about the Conservatives’ relationship with the ADQ. I don’t have much to add, but I’ll throw my hat in the ring anyway.

But I think there’s another reason for the love affair and that’s Quebec’s regional politics. Huge swaths of the province (like most of Montreal) remain staunchly Liberal at both the provincial and federal levels, while a number of others (like the Saguenay) are decidedly sovereignist, meaning their votes are parked with the PQ and the Bloc. The Conservatives probably shouldn’t expect to make a lot of inroads in either place. What the adéquistes managed to do in the last election is carve out a handful of strongholds of their own (most notably in the Beauce, large parts of Quebec City and some of the more distant suburbs on Montreal’s north and south shores). Those areas, having shown their small-c conservative mettle, are now ripe for the Tories’ picking in a federal election. If the Conservatives can exploit the same urban-rural divide the ADQ has been playing up in the province, they just might get the seats they need for a majority, Montreal be damned.

Thanks to Flickr user Mr. dale for the photo