How the West was Frenched 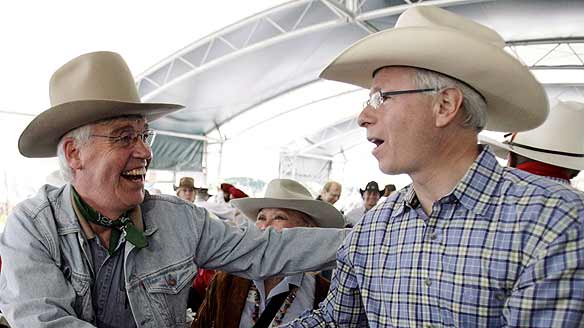 Mammas Don’t Let Your Babies Grow Up to Be Liberals. (Image courtesy cbc.ca)

Good golly and heavens to Betsy. Nearly 40 years after it was enshrined, it seems official bilingualism is being dragged kicking and screaming through the western hinterland of this fine country. La Presse’s Martin Croteau lets us know today that thanks to a $54 traffic ticket, Alberta, Saskatchewan, Manitoba and the Northwest Territories may actually have to recognize the constitutional status of French.

In 2003, Gilles Caron made an illegal left turn in Edmonton. His ticket was entirely in English, as was his court appearance. Caron, a native of Quebec, said he should be allowed to face justice in his langue maternelle. After five years (justice is slow in both languages, it seems) the Provincial Court of Alberta agreed. This, as Croteau notes, “could force the governments [of Alberta, Saskatchewan, Manitoba and NWT] to translate all their laws and allow its citizens the right to a trial in French.”

I can practically smell the mouth breathers across the country choking back the foam in rage. To paraphrase their favourite boogeyman, all I can say is, go on and choke. History, as much as Trudeau, tells us this country is as French as it is English.

Though staged in an Alberta court, the case has such far reaching implications in part because of Caron’s lawyer, Rupert Baudais. He noted that in 1870, the British Crown handed over the rather immense territory that encompasses modern-day Alberta, Saskatchewan, Manitoba and NWT. The Brits did so with one caveat: that the local Métis could continue speaking their language. What, pray tell, was that language? French. Yadda, yadda, yadda, Caron makes an illegal left in Edmonton. This should be very interesting, especially since Caron is willing to go to the Supreme Court should the Government of Alberta appeal.

(Incidentally, one half of Deux Maudits Anglais wrote about the sizable influx of Quebecers going to Alberta last fall.)