I am the 20 per cent tipper and I bet you are, too 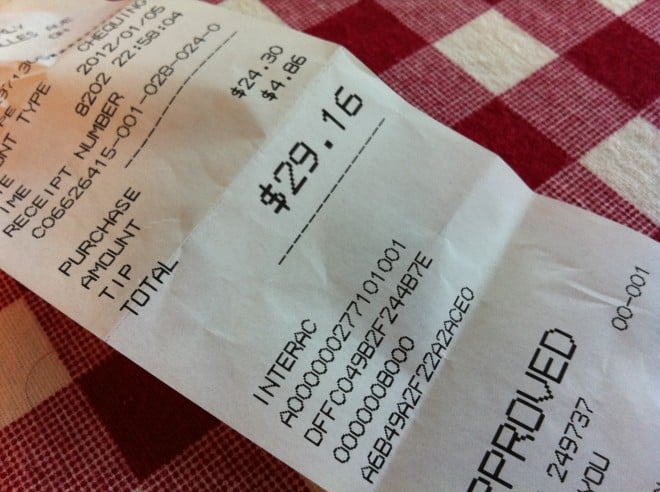 The 17th edition of Emily Post’s Etiquette, which dates to 2004, says that, “In New York, San Francisco, Boston, and other major cities, fifteen to twenty percent is standard.” So, eight years ago tipping 15 to 20 per cent was considered the norm in big cities.  Toronto is a big city, no? And it’s 2012. That’s eight years after 2004.

I’m telling you this to help explain why I’m so flabbergasted over how a Toronto Star story published last week on tipping 20 per cent being “the new normal” still has legs, and the gams won’t stop growing! If you haven’t been following it, here’s a brief summary: Amy Pataki reviewed both The Westerly and The Ace, two new restaurants on Roncesvalles Ave. in Toronto’s west end, for the Toronto Star. A few days later, Pataki wrote another piece in the Star reporting that both of these places have two options on their debit machines for customers to leave either a 20 per cent tip or to choose another amount. The headline read, “Standard tip in Toronto restaurants now 20 per cent.” That same day, the story was picked up by Toronto Life on their daily Dish blog and, the next day, the National Post reported the story on the paper’s front page. The Star did a follow-up piece the day after that, and since then countless blogs and websites , including Yahoo and BlogTO, have continued to report on it.

And people are furious! Hundreds of commenters on all of the sites feel that only two prompts, one to tip 20 per cent and one to choose another percentage, is presumptuous and that somehow they were being forced to tip more than they felt comfortable doing. And hundreds of other commenters broadened the scope of the discussion (even changing it entirely, as web commenters often do) by broaching how tipping works in places like Australia or Japan; how restaurateurs should pay their staff a higher wage so that servers don’t rely on gratuities so much; and how some people don’t tip at all.

The one point that hasn’t been made is that tipping 20 per cent is not a new phenomenon. I remember my first restaurant job moving to Toronto, where my serving colleagues, who were far more city savvy than I was, informed me that I was holding the tip expectation bar rather low: “Don’t you know? Twenty per cent is the new 15 per cent,” they assured me. And that was in 1998.

Perhaps that explains my disinterest when I first saw the 20 per cent option at both The Ace and The Westerly. (I ate at both places twice before the Star story broke. That sounds gluttonous, but they are around the corner from where I live.)  Rather than being rubbed the wrong way, or made to feel like I was being taken advantage of, in each instance I thought, “Oh, isn’t this convenient.” And that was it. I’d had four great meals with four great customer service experiences and felt relieved four times not to have to complicate things with elementary math. (And even if the service had been bad, I would have simply hit the other button to avoid the math bit.) Actually, one time I felt like I stiffed the server a bit because the bill came to $24.30 and the 20 per cent tip only amounted to $4.86. If I hadn’t had the easy option, I would have given a fiver. And I bet you would have, too.

Which brings me to my final point: you know how when you go out for brunch with your spouse or partner or friend, the bill is always 30 bucks and change? You tip five or six bucks, right? That’s 20 per cent. So you’re doing it already.

FILED UNDER: 20 per cent tipping Toronto