In conversation with Graham Fraser

The commissioner of official languages on Montreal’s language shift, a bilingual Olympics and the PQ government 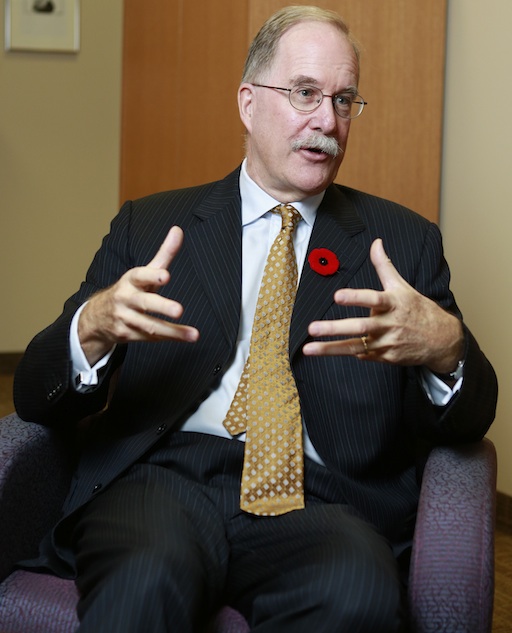 For the francophone population, it’s a sobering statistic: according to 2011 census data released last week, people who speak immigrant languages will soon outnumber Canadians whose mother tongue is French. Yet Graham Fraser, the commissioner of official languages, sees an enduring vitality of the language both within and beyond Quebec’s borders. He learned to speak French in the trenches: as a 19-year-old university student, the Ottawa-born Fraser worked on an archaeological site in Quebec where he “had the sense of being a foreigner in my own country,” as he wrote in his 2006 book Sorry, I Don’t Speak French.

Q: The census suggests that “other” languages will overtake the number of French speakers in Canada. Given that, is the French language in danger outside of Quebec?

A: We’ve actually seen an increase in the number of francophones outside of Quebec. It’s gone over a million, after years of decline. We’ve seen the growth of [French] schools and school boards across the country in every province, as well as of francophone institutions in almost every province. And the thing to remember about “other” languages is that it varies among a whole range of languages. People don’t speak a common “other” language, like Spanish in the U.S. The other thing to remember is that over three generations, people choose to adopt the majority language of the province where they are living. In 1951 there were 450,000 Canadians who reported that they spoke Ukrainian at home. By 1981 that 450,000 had become 45. That is the natural pattern of immigrant languages. That has not been the case with French.

Q: There’s a large increase in the number of French speakers in Alberta. Can you explain that to me?

A: It speaks to the economic boom. We are seeing francophones from Quebec and New Brunswick moving to Alberta like everyone else, and we’ve seen an increase in the francophone population outside Quebec. What I find distressing is that nationalists in Quebec as well as certain columnists outside of Quebec have used these census numbers to present a narrative of decline. It’s self-evident that the percentage of mother-tongue French speakers would go down, because as a country we decided we are going to welcome 250,000 newcomers every year. Since the last census, we’ve welcomed 1.25 million newcomers, 80 per cent of whom don’t have English or French as their mother tongues. Not only is it not surprising, it is arithmetically impossible to maintain the same level of English or French spoken at home when you are welcoming this number of newcomers.

Q: I always get the feeling that federal politicians see the Official Languages Act as a nuisance. Am I out to lunch?

A: It all depends on whom you talk to. There are some politicians who take it very seriously. Prime Minister Stephen Harper makes it a point of beginning all his statements in French wherever he is. Even though this is a government that draws much of its support from Western Canada rather than Quebec, we see a significant number of bilingual ministers who can engage in the cut and thrust of parliamentary debate in French and in English. There is a group within the political class, including columnists and politicians, when they hear that French is losing the proportion it once had, they say, “Well, I don’t have to worry about that anymore,” that maybe they should learn Mandarin instead of French. In my experience, the people who talk this way are people who aren’t going to learn either French or Mandarin.

Q: What does it tell you that Quebec is really the only place in the country where it is perfectly natural for citizens to speak French?

Q: Tell me why a mail carrier in Saskatoon has to speak French.

A: He doesn’t have to. There are only a few reasons why public servants should have to speak French. One is to serve the public at a certain number of designated bilingual offices where numbers warrant. At a more senior level, it’s important for public servants to be able to brief a minister in the language of his choice. Digging a little deeper, you may ask if a mail carrier doesn’t have to speak French, why does a border service agency employee in Vancouver have to be able to say, “Hello, bonjour”? There are two fundamental elements to language services: what you need if you are living in a minority community, and then the right as a Canadian to be able to travel across the country and get services. During the Olympics, Vancouver was able to welcome thousands of people from Quebec in their language of choice. It was a great success in linguistic duality.

Q: But that’s an event. That’s one thing.

A: And the hope was for federal institutions to raise their game. In terms of business it makes sense. Americans aren’t travelling to Canada as much as they used to, so it is really important that our tourism industry be able to welcome francophone Canadians across the country.

Q: But think of the expense versus the numbers in Vancouver, for example.

A: There are 66,000 francophones in British Columbia, and there are thousands of Quebecers who travel. And in B.C. there are a few hundred government positions that are designated bilingual out of 15,000.

Q: How much do you think the election of a Parti Québécois government has changed the tone in Ottawa?

A: I think there is a recognition that it is even more important that the federal government and federal institutions do what the law says they should do, which is to provide services. The issue is no longer on the back burner. There’s more attention on the issue than there was before, and they cannot afford to make mistakes on this.

Q: It always seems to take a PQ government to get this kind of reaction.

A: There’s no question of the link between language policy and national unity.

Q: There is a truism within the PQ and certain French media that French is in decline in Montreal. How much truth is there to that?

A: Many francophones in Montreal are moving to the suburbs. That’s not a sign of failure, it’s a sign of prosperity. Those families in the east end of Montreal who are leaving are being replaced by immigrants on the one hand and young anglophones who are attracted to Montreal because of its cultural vitality, its energy. They’re not coming to Montreal instead of going to Winnipeg or Regina. They’re coming to Montreal instead of going to Berlin. Montreal has become an international centre of attraction for a whole series of cultural phenomena: the independent music and film scenes, the high-tech creative industries. I think those members of the national assembly who unanimously voted to congratulate Arcade Fire [for winning the 2011 Grammy for album of the year] should understand that the phenomenon of Arcade Fire is directly related to the fact that Montreal has attracted these young English-speaking Canadians and Americans who have come to Montreal because of what it is.

Q: Why can’t nationalists just acknowledge how well their language laws have worked?

A: It is hard for people who have been on a defensive footing for a long time to acknowledge the huge gains that have been made because there’s always a sense that there could be backsliding, there could be slippage, the trends could turn around particularly with increased globalization, the Internet, various things that transform the way in which we communicate in the world. At the same time, you can’t be a welcoming society and maintain the same percentage of mother-tongue French speakers.

Q: What does it do to the image of that welcoming society when someone like PQ minister Marie Malavoy refers to English as a “foreign language”?

A: I just thought that she was wrong. I don’t think it’s perceived as a foreign language in Quebec. The fact that we see an increase of bilingualism amongst francophones in Quebec is an indication that people don’t feel it is a threat to them. There’s been this long-standing tradition of suspicion that learning another language, particularly English, is a slippery slope toward assimilation. I don’t think that’s true, and it is often a concern that is most articulately expressed by people who are highly bilingual themselves, like [former Quebec premier] Jacques Parizeau, [former PQ cabinet minister] Jacques-Yvan Morin and [PQ cabinet minister] Jean-François Lisée.

Q: The subtitle of your book Sorry, I Don’t Speak French is “confronting the crisis that won’t go away.” Is it still a crisis, and is it still not going away?

A: Crisis is a very big word. Do I consider it an ongoing challenge? Absolutely. Do I feel the issue is treated as seriously as I think it should be? No I don’t. Linguistic duality is a huge asset that we have as a country. Much more than we recognize, it is seen as a value by immigrants to this country, who are to a large degree attracted to the country because of what it says about us, our inclusiveness, our tolerance, our openness to the world. Never underestimate the power of symbolism.