In defense of M.I.A. 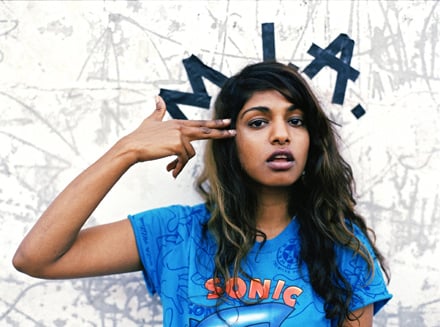 To recap the events so far: Rapper M.I.A (born Maya Arulpragasam) submitted to a lengthy profile for the New York Times Magazine, written by Lynn Hirschberg. Maya didn’t like the way she was portrayed and subsequently tweeted Hirschberg’s personal phone number. She (Maya) also complained that she’d been quoted out of context (which the Times admitted) and put online some clandestine tapes she’d made herself of the interviews with Hirschberg that showed that the Times reporter had been less than scrupulous in her description of events.

But even if Hirschberg hadn’t torqued things, her whole agenda is so ridiculous that Maya has plenty of reason to be annoyed.  While most of the profile is interesting and pretty straightforward, Hirschberg gets in enough digs to make it clear that she doesn’t think much of Maya’s limousine-terrorist schtick. Hirschberg makes much of Maya’s relationship with Ben Bronfman, son of Seagram’s heir Edgar Bronfman Jr., and her tone when describing their house in “very white, very wealthy Brentwood” is almost gloating. But it’s passages like this where Hirschberg makes her agenda plain:

Maya’s tirade, typical in the way it moved from the political to the personal and back again, was interrupted by a waiter, who offered her a variety of rolls. She chose the olive bread.

Unity holds no allure for Maya — she thrives on conflict, real or imagined. “I kind of want to be an outsider,” she said, eating a truffle-flavored French fry.

Okay, we get it. Maya’s a hypocrite. Here she is, trying to play up her family’s Tamil gangsta cred while drinking white wine and eating yuppie fries in a fancy restaurant in Los Angeles. And in this age of authenticity, where an artist is only entitled to those forms of personal, artistic, and political expression that are properly underwritten by their background. If you don’t live it, you can’t say it, and a hypocrite is the absolute worst thing you can be.

Hirschberg summarizes the dilemma thusly: “What Maya wants is nearly impossible to achieve: she wants to balance outrageous political statements with a luxe lifestyle; to be supersuccessful yet remain controversial; for style to merge with substance.”

It makes one wonder what planet Lynn Hirschberg is living on. There is absolutely no tension between balancing radical politics with high living, no difficulty in making style into a political statement. Just the opposite: the selling and marketing of non-conformity – what’s been called radical chic, or the rebel sell, has been the very essence of our culture for decades. The point has been made over and over again, by everyone from Tom Wolfe to Thomas Frank, but for some reason Lynn Hirschberg seems to have missed the memo. What Maya is doing isn’t impossible to achieve; it’s frigging dead simple.

At one point, Hirschberg calls Maya’s new video, “Born Free”,  “politically naïve,” but it is pretty obvious that it’s all-too-savvy. Want to know just how clued out Hirschberg is? After Maya talks to some designers about riffing off the uniforms worn by Blackwater operatives for her upcoming tour, Hirschberg seems perplexed. “The oddity of using a garment linked to mercenaries to convey a very different message seemed to elude Maya,” she writes.

At risk of beating the point to death: there is nothing remotely odd about a political radical adopting the uniforms of the oppressor and co-opting their meanings. Bohemians have been doing that for literally centuries, most notably though during the Vietnam war.

In short, the Times profile of M.I.A. is a travesty. Lynn Hirschberg is desperate to portray her subject as a sell-out, but Hirschberg is the one who’s fallen for the authenticity hoax.