In search of average

(UPDATED with a graph of the least average ridings—the freak ridings, if you will—after the jump. And UPDATED AGAIN with a brief look at the prospects for the average ridings tonight.)

I’m not normally much for Parliamentary nerdery, but there was some discussion last week inside the Maclean’s bunker about what Canada’s “most average riding” might be. I’m sure the subject has been explored before, but my interest was piqued. So, using all my Microsoft Excel prowess and far more hours than I would care to admit, I went ahead and compiled the 2006 Census data for Canada’s 308 electoral districts, picked out what I thought were some reasonably important and representative indicators, ran them through a proprietary weighting formula of my own devise, and arrived at the following list of Canada’s 10 most average ridings, plus (which you’ll find in the graphic below) the most average riding in each province not represented in the top 10.

The most average of the average are as follows: 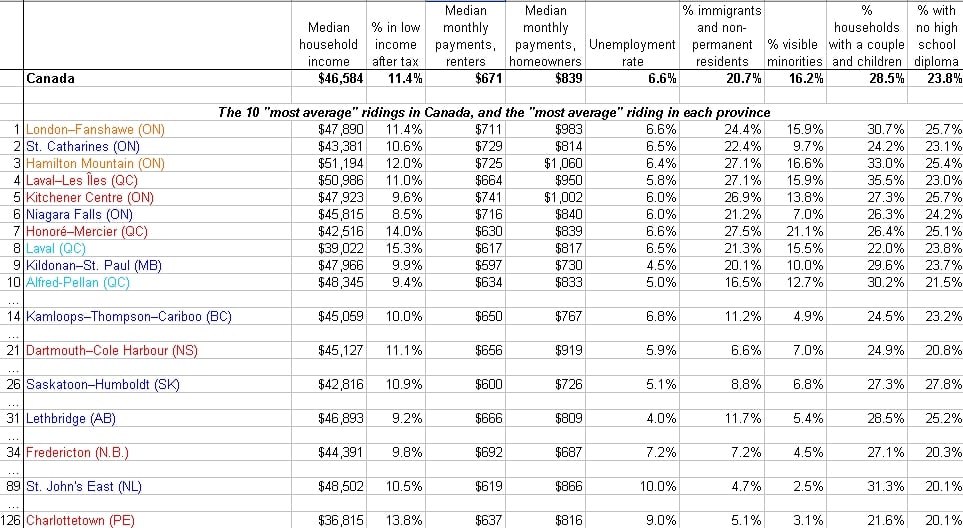 (You’ll find explanations of all the indicators after the jump.)

Click on the graphic to see the component indicators. It’s even colour-coded according to the party that holds each riding! I’ll have a list of the top ten least average ridings for you all shortly, The top ten least average ridings are below—all Liberal but one, for whatever that’s worth, probably nothing. I may have some sort of insight into the averageness of these ridings and what it represents as the results pour in tonight—no promises on that front, though. It may well not represent anything. But I’ll certainly let you know how they’re all faring as the night progresses.

UPDATE II: What does it mean? The average Canadian ridings have two real nailbiters on their hands—if 2006 is any indication, that is, and it may well not be. One of them’s a rematch: in St. Catharines, Walt Lastewka will try to make up the 244 votes by which he lost to Tory Rick Dykstra in 2006. In London–Fanshawe, meanwhile, the most average riding in all the Dominion, Glen Pearson lost to Dipper Irene Mathyssen two-and-a-half years ago by just 866 votes; this time Mathyssen’s up against Liberal Jacquie Gauthier. (Pearson, of course, was quickly redeployed to London North Centre, where he bested Elizabeth May in a by-election. This is a good reminder of just how maddening May’s Reason #9 for running in Central Nova—that she’s from there—remains.) Another riding that’s at least theoretically in play is Honoré-Mercier, which Pablo Rodriguez and his fabulous hair won by 1,940 votes in 2006. Did his stupid meet-our-impossible-Kyoto-targets-or-else sufficiently impress the locals to overcome the rapidly diminishing Liberal brand in Quebec? We shall see…

Among the least average ridings est Papineau, where Justin Trudeau espère de win contre the Bloc incumbent, Vivian Barbot. Pierre Pettigrew (speaking of great hair) lost to Barbot by fewer than 1,000 votes last time out, but Trudeau espouses an anachronistic version of federalism, produces creepily bilingual videos and suffers, in our view, from an altogether unbearable personality. In theory, he’d be in tough. But in theory, communism works. Just ask Justin’s brother!

What’s most interesting among the least average ridings isn’t just that the Liberals won nine of them last time around, but that they won seven of them with straight majorities—62 per cent for John McCallum in Markham–Unionville, 63 for Jim Karygiannis in Scarborough–Agincourt, 64 for Judy Sgro in York West, and a colossal 66 for Derek Lee in Scarborough–Rouge River. The most obvious phenomenon that speaks to is the party’s traditional dominance among recent immigrants. These ridings feature some of the heaviest visible minority populations in Canada.

So ends my attempts at deep analysis—yours is welcome in the comments after 10pm. I’ll keep an eye on these races as the night progresses.

The indicators I used were: