Iran has “hunted” a U.S. drone flying illegally in its airspace, according to a report from the Iranian state news agency Tuesday.

The report says that the unmanned ariel vehicle is a ScanEagle, which was flying over the Persian Gulf. The ScanEagle is used for reconnaissance.

For its part, the U.S. denied Iran’s claim, saying that no American drones have gone missing. “The U.S. Navy has fully accounted for all unmanned air vehicles (UAV) operating in the Middle East region. Our operations in the Gulf are confined to internationally recognized water and air space,” Commander Jason Salata, a spokesman for U.S. Naval Forces Central Command in Bahrain, told Reuters.

Meanwhile, Iranian state television showed images of officials examining what appeared to be a drone, under the text: “We will trample the U.S. under our feet,” reports The New York Times.

Should this latest “hunted” drone proven to be real, it means that tensions are continuing to escalate between the U.S. and Iran after Nov. 8, when U.S. officials said Iran had fired on one of its Predator drones. Iran confirmed that it had, indeed, fired at a U.S. drone that was in its airspace. The Americans, however, said the drone was flying over international waters and that Iran had no right to fire upon it.

This latest incident also comes amid repeated threats from Iran, saying that it will shut down the Strait of Hormuz, an important oil shipping route. 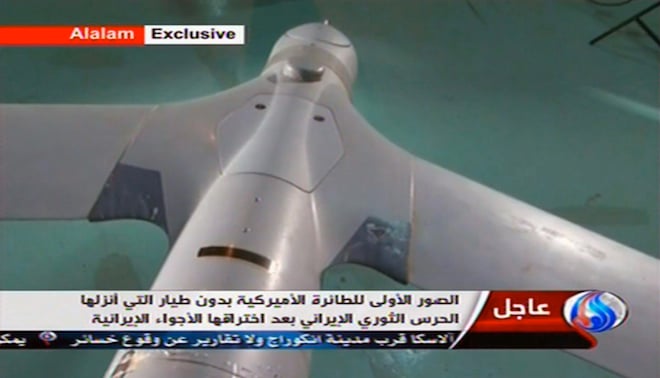 This image taken from the Iranian state TV's Arabic-language channel Al-Alam, showes what they purport to be an intact ScanEagle drone aircraft on Tues., Dec. 4, 2012. (Al-Alam TV/AP Photo)