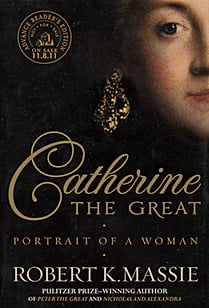 She wasn’t Russian and never expected to be monarch of a vast, northern empire. Yet Catherine oversaw Russia’s golden age, a time of strategic conquests and cultural blossoming. Her generals captured Crimea and opened up the Black Sea to Russian shipping. She bought so many Old Masters that she built the Hermitage to house them. She read voraciously, and corresponded with the likes of Voltaire and Diderot. And she had time for affairs of the heart, churning through a string of lovers.

Massie has written a biography as captivating as its subject. Born Sophia of Anhalt-Zerbst in 1729, the daughter of a minor German prince, she was sent east at 14, converted to the Orthodox religion, had her name changed to Catherine, and was wed to the heir to the Russian throne. It was a disaster. Husband Peter’s early upbringing in Germany had been so violent that he grew up to be “fearful, deceitful, antagonistic, boastful, cowardly, duplicitous and cruel.” He loathed Catherine. The couple never had sex. All of her children were fathered by lovers.

While Peter loved all things German and hated everything Russian, Catherine fell in love with her adopted land, and, in turn, the insular nation fell in love with her. That affection was crucial after Peter acceded to the throne in 1762. He so alienated Russia’s elite that there was no resistance when Catherine and her lover Gregory Orlov masterminded a coup. During her 34-year reign she turned Russia into a great power. Yet she hated anyone calling her by that adjective. In 1788 she wrote to a friend: “I beg you no longer to call me Catherine the Great, because . . . my name is Catherine II.”