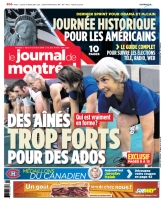 Let’s see, you have an historic election taking place down south, the results of which will echo across the planet and will likely have an effect on the vast majority of your readership.

On the other hand, well… you have this great, simply-can’t-wait feature on how old people who work out at the gym are healthier than young people who sit on the couch and smoke pot. What do you do?

a) Kill the feature. It’s the friggin’ biggest, most important election in recent history, for Crissakes.

b) Run the feature because the boss is probably old and likes to jog, but stick it inside and leave the front page to, uh, Barack wuzzizzname.

c) Old people exercising? Holy crap is that news! Splash it on the front page and stick the thing with the black guy and the war hero in the corner somewhere.

If you chose ‘C’, you have a future at Le Journal de Montréal.