Contradicting reports on the sex of the Royal baby 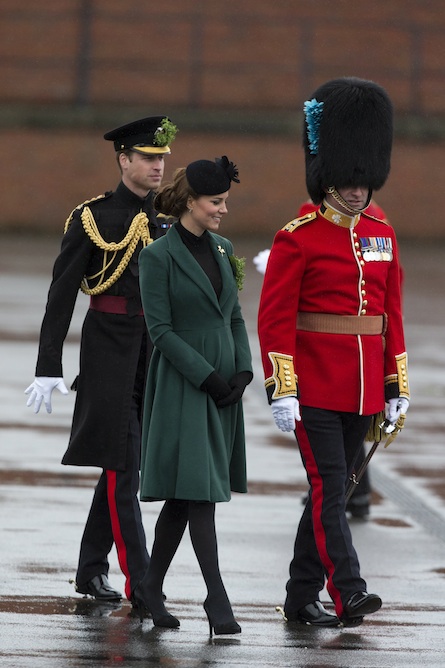 The five-month pregnant duchess of Cambridge revealed on Sunday that she’s hoping for a baby boy, the Daily Telegraph reports.

The news was revealed to 29-year-old guardsman Lee Wheeler during the duke and duchess’s visit to his regiment’s Aldershot barracks at the Irish Guards’ St Patrick’s Day parade. After Wheeler told Kate that he missed his 22-month-old son while on duty, he asked if she knew whether she was having a boy or a girl. After the duchess  replied, ‘Not yet,’  she said: ‘I’d like to have a boy and William would like a girl.’

“I asked her if she had any names yet, and she said no,” Wheeler told the Daily Telegraph, which contradicts last week’s  US Weekly cover story that reported if Will and Kate have a daughter, they will name her Elizabeth Diana Carole, in honour of  the Queen and both of their mothers.

The duchess, who wore the same green Emilia Wickstead dress coat that she wore to last year’s parade, left royal watchers and tabloids salivating just two weeks ago during a visit to Grimsby. There, she told a well wisher “Oh is this for our d…” before stopping, reported The Daily Mail. As Kate continued her rounds through the crowd, another woman asked if she had indeed said daughter. “No, we don’t know!” the duchess reportedly replied.

Looks like no one will, until July–when the royal baby is due.