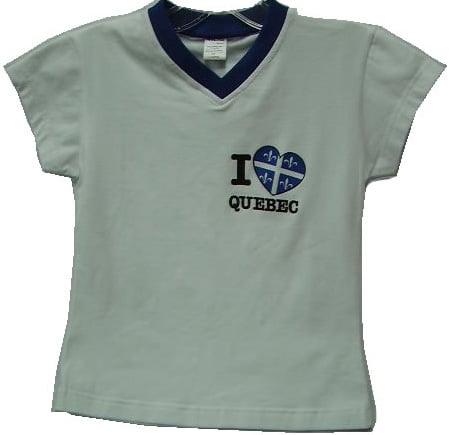 Here at Deux maudits anglais headquarters, we’ve been wondering about the rather loose use of the term ‘nationalist’ in Quebec during this election. Sensible lads that we are, we discussed. Have a read.

Marty: Good morning, Phil. The economy is in ruins, the world is going to hell, but we have more pressing issues to deal with. Like, why is everybody and their grandmother a nationalist in Quebec these days? Duceppe has been one since forever, obviously. Now, though, everyone has caught up. Harper says he’s a nationalist. Dion is apparently a nationalist, which is about the funniest thing I’ve read in the last 10 minutes. And Jack Layton played ‘Gens du Pays’ on his guitar on a Quebec radio station, prompting me to set fire to my head. It used to be a dirty word; now, you can’t get elected without it. What gives?

Phil: Morning, Marty. I was more than a little baffled myself when I heard Layton had been singing Quebec’s unofficial national anthem on the radio while Dion was re-christening himself as not-that-Clarity-Act-dude. For years, they cut their teeth championing the role the federal government could (or should) play in people’s lives. But now we’re expected to believe they whistle Félix Leclerc songs on their way to work in the morning. I can think of two reasons everyone’s suddenly so eager to hop aboard the nationalist bandwagon (despite the constant rumours of its impending breakdown):

1) The Dumont effect: Le p’tit Mario took the province by storm in the last provincial election with his vague ‘autonomist’ rhetoric. That his platform didn’t actually include much outside of a systematic dismantling of the provincial apparatus never really mattered; and never mind, too, that he’s since bombed as opposition leader. I think what Dumont’s ascendance proved is that Quebecers feel increasingly alienated from the political class (and their proxies on the Plateau), and identity is a good way to re-connect with them.

2) There isn’t much else to campaign on: Sure, the manufacturing and forestry sectors are going down the tubes, and the province’s infrastructure woes have become downright embarrassing. But no government can solve either of those problems without shelling out more money from a shrinking public purse. On health care matters, the province seems to have tacitly accepted a growing role for the private sector, but no one in their right mind would campaign on that either. And, as for the environment, Quebec won’t likely be effected by a carbon tax because most of its energy is generated by hydro-electric dams. That leaves identity as the principal way of getting everyone’s attention. Given how little the parties’ electoral program has to reflect their new found nationalist bent (see above), it’s a pretty low-risk strategy. Can you really blame them for going all Bobby Bourassa on us?

Marty: I suppose not. The difference, as you point out, is that Bourassa had teeth. He was into the idea of autonomy long before Dumont, and had the political clout to go get it. And though he was a federalist, there was a certain ambiguity to his actions, to the point where Jean-François Lisée, among other sovereignist luminaries, was convinced that Bourassa was going to call a referendum on sovereignty.

But onto the implications. Ten years ago, labeling a federalist politician as a nationalist, without using the word ‘Canadian’ in front of it, would have been a career sinker. Now it seems it’s a prerequisite to getting elected in Quebec. Look at Harper (just not in the eyes; you’ll get a headache): It wasn’t eight years ago that he was whining about how Quebec has the rest of the country over a barrel. Fast forward to this campaign and, yadda yadda yadda, he’s praising the Patriotes’ fight against the British in 1837.

I wonder if, with everyone calling themselves nationalist, it has diluted the very term. I wonder whether it’s a stealthy appropriation of our homegrown jargon that we used to use to scare the rest of the country. ‘You see, Bob and Wendy from Bayfield, Ontario? Quebec nationalists aren’t scary. They might speak funny, but they’re friendly as can be. Hell, I’m a Quebec nationalist, and I live in Ottawa!’

Phil: On the notion the meaning of “nationalist” has become diluted enough to be palatable even to federalists, I wonder if Lucien and lucides didn’t get that ball rolling. By shattering the idea of a Quebec consensus around the need for a strong, interventionist government, Bouchard and co. effectively split the nationalist coalition along left/right lines. It’s further splintered since then, and now, pretty much anyone can find a kindred spirit on the other side of the federalist/separatist divide. I mean, aside from the fringe characters, is there anyone left on either side of the debate that the other side still finds patently objectionable?

Marty: Only when the microphones are turned on. That’s been the effect of having the Bloc in Ottawa for so long, I guess. Bloc MPs, who used to be about as nationalist as you can get, are downright chummy with their supposed enemies now.

Phil: In a way, I suppose the two of us are as guilty as the Bloc of playing up fake rivalries: I’m not really a Toronto anglo, I just play one on a blog.