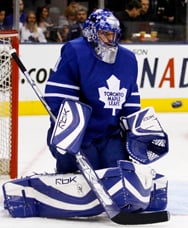 In what is surely just the tip of the iceberg when it comes to the Leafs off-season game plan to purge itself of salary and less-than-stellar players, Kyle Wellwood and Andrew Raycroft have been placed on waivers. I can understand getting rid of “red-light” Raycroft (not to mention that it cost the team a future blue-chip prospect in Tuukka Rask), but I was really hoping Wellwood would put down the doughnuts and start showing some of that magic we all know he is capable of producing on a nightly basis. Wellwood would be a nice addition to a team looking for a power-play specialist and a third-line centre who doesn’t need to play more than 12 minutes a game. As for Raycroft, he needs to stop going down to his knees every time a player crosses the blueline–as illustrated in the picture to the left.