Letters: 'If it is perceived that we are divided, we will be defeated' 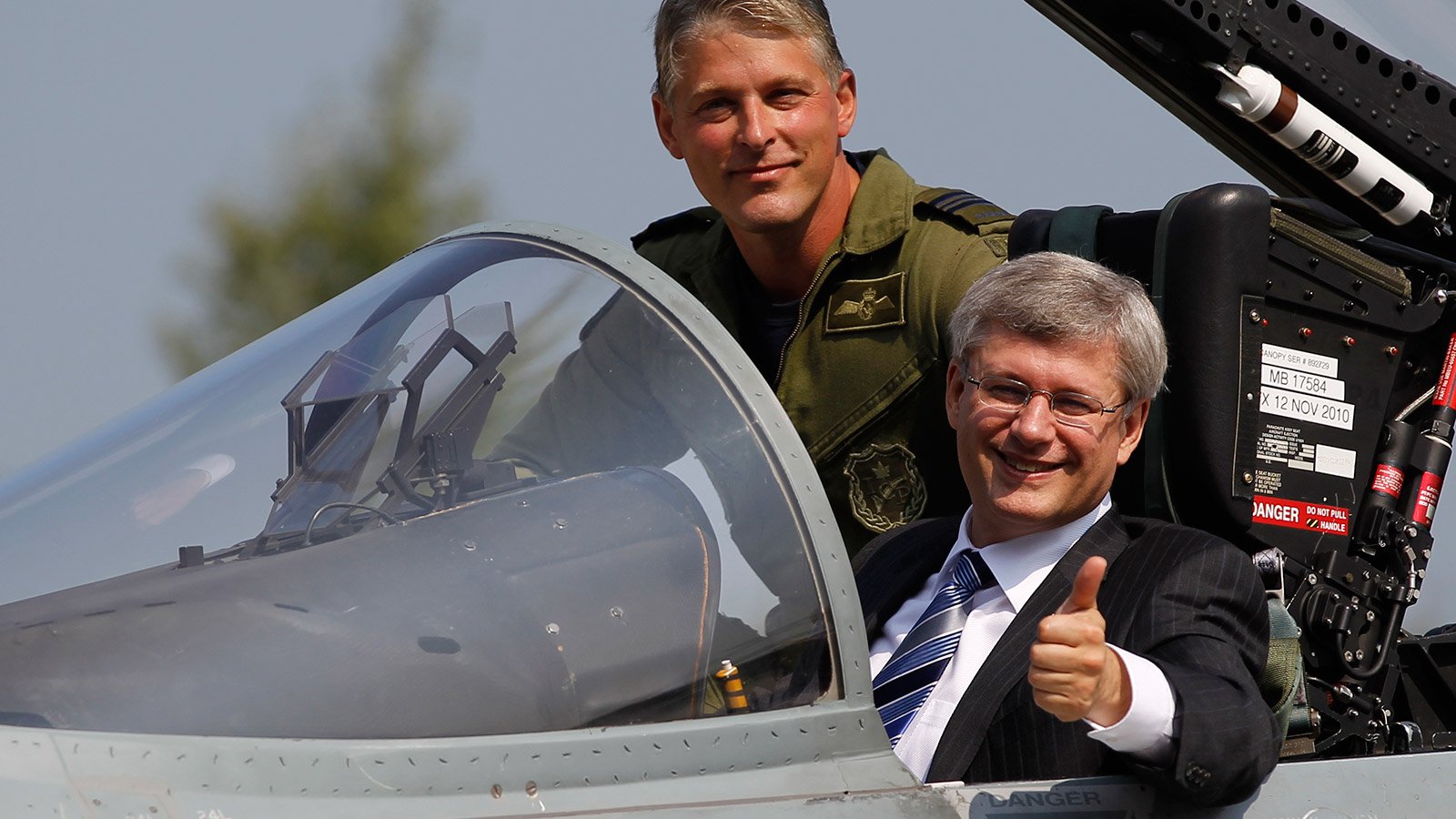 Canada is at war (“Top gun (not),” National, Oct. 20). This stark and horrifying reality is unique and distinct from any other national issue. It may be the only instance when it is critical that we suspend our individual opinions and stand united. Now is not the time to endeavour to score political points. It is shameful for anyone to manipulate this crisis to obtain an electoral advantage. I implore all our leaders to stop their petty posturing and present themselves as a cohesive front. We are sending men and women into harm’s way. If it is perceived that we are divided, we will be defeated. And defeat is not an option.

Are we so naive as to think that sending six jets to drop bombs on terrorists and innocent civilians will do anything more than increase the number of homegrown “terrorists?” Do we not realize that this is a civil war into which Canada is inserting itself? Have you ever had the experience of putting your hand into a hornets’ nest to “fight the enemy,” just because you saw someone being stung by a hornet at a distance? We need political leadership that has the courage to work for humanitarian goals rather than seeking revenge for acts of barbarism in other countries and other cultures, which then turn their wrath on us.

It is precisely because of Prime Minister Stephen Harper’s antipathy toward “paying attention to the context of foreign affairs” that his decision to confront Islamic State is so troubling. A wiser man would note: America’s unconditional support for Israel has contributed enormously to the creation of Palestinian refugee camps, in which millions of people live in poverty and desperation; that its client state in the region, Saudi Arabia, freely exports weapons and fundamentalist Islamist ideology; and that Sunni-Shiite tensions were markedly exacerbated as the United States led two wars to restore Western hegemony over Iraq’s oil fields. Ultimately, the defeat of Islamic State will require a comprehensive regional solution that addresses each of these issues, including an honest assessment of our own role in fostering them. Harper was correct in observing that there are “long-term opportunities that can truly transform our world,” but, bereft of context, “bombs away” is not among them.

Your Oct. 20 editorial asks: if Islamic State will prove to be as difficult to dislodge as Afghanistan’s Taliban; if we will be able to establish a stable and coherent government; how many civilians will be accidentally killed; whether air power alone will work; and if the mission will go beyond six months. These are not tough questions. Any student of history can easily answer. We cannot dislodge Islamic State. Chaos and civil strife will continue until an authoritarian regime takes over. Too many innocents will die and suffer and the people will come to hate us. Air power won’t work—but, then again, neither will boots on the ground. The mission will continue until we slink away in defeat. This military adventure will cost Canadian soldiers’ lives, squander billions of dollars, and make us a target for terrorists at home.

Barbara Amiel does not know her European history (“Will the Allied bombing do much good?” Oct. 20). Though the 1648 Treaty of Westphalia may have lessened the religious hammering in Europe, it did not represent a lasting move toward any type of generalized peace. Furthermore, suggesting that it would be fine if Turkey would smash Islamic State and take over Syria is irresponsible at best. Just because Turkey ruled the area for a period of time—which, incidentally, ended nearly 100 years ago—should it violate Syria’s independence and international law by taking it over again? Finally, Andrew Leslie’s statement that the largest threat to Canada are the victims of the brutality of Islamic State is correct. Witness the way in which Germany was treated after the First World War had a direct correlation to the economic fall of the nation, the rise of Hitler, and the Second World War. It can be argued that the hell that Islamic State is spreading stems directly from the repercussions of the Iraq wars, as well as the Afghanistan war.

As an immigrant myself, I can suggest several very good reasons for Canada to resist the temptation to triple its population (“Why it’s time for Canada to grow up,” National, Oct. 20). We are unable to meet the needs of Canadians already here. Immigrants put more pressure on essential services. There is no sure way of separating immigrants of convenience—people who come and get the citizenship so they have a haven in emergencies, then return to their homelands—from genuine immigrants. There is only a limited influx that can be reasonably integrated with the existing population. Having immigrant ghettos may not bother idealists or economists, but it is a source of many problems in the not-too-distant future. Finally, if we need to add to the population, we should be receiving the refugees from distressed areas in the numbers we can absorb, rather than “economic refugees” from settled areas.

Your Oct. 27 editorial attempts to paint Stephen Harper’s regime as “liberal.” This, despite so much evidence to the contrary: gutting the the long-form census; virtually muzzling government scientists; shutting down government science libraries; shutting down the long-gun registry; slashing staffing and budgets at Environment Canada; wasting more than $100 million on ads touting the government’s so-called Economic Action Plan, instead of spending that money on job creation; wasting $28 million “commemorating” the War of 1812, instead of spending it on real, live veterans whom the government is nickel-and-diming; maintaining a one-dimensional foreign policy in the Middle East; repeatedly burying many pieces of unrelated legislation in massive “omnibus” budgets, in order to prevent detailed discussions and debates; eliminating valuable advisory bodies such as the National Roundtable on the Environment; and attacking the integrity of professional public officials, including the parliamentary budget officer and the chief justice of the Supreme Court. The Harper government: “liberal”? Nice try, but it doesn’t succeed.

Harper’s liberal gestures exist only because, without them, he wouldn’t stay afloat in the current climate. He doesn’t open the abortion debate or discuss gay rights because of his liberal ideas; he does so because it serves him well not to. Any expedient “liberal” policy made by Harper is completely overshadowed by his fundamental conservatism. When the courts block his policies, it is not that he wants them to fail and, de facto, look like a liberal. Harper leads the most conservative Canadian government in living memory.

Your Oct. 27 editorial cited Citizens for Public Justice’s support for the Working Income Tax Benefit (WITB) as partial evidence of Harper’s liberal bent. While we do support the WITB as sound public policy, we believe the refundable amount of the WITB should be increased and extended higher up the income ladder to the after-tax low-income cutoff, so that it becomes a pathway out of poverty for Canadians who work but remain poor. To date, the federal government has failed to take the required steps to truly make the WITB a “pathway out of poverty.” What’s more, they have ignored calls for a federal poverty-reduction strategy, which have come from the House of Commons, the Senate and the United Nations.

Your article “A quiet revolution” (International, Oct. 20) mentions Beijing’s bid to undermine a full and free election in 2017 by having the candidates for the chief executive (CE) screened by a nominating committee of 1,200 hand-picked residents, and that the Basic Law has very little to say about voting.Article 45 of the Basic Law clearly stipulates that the ultimate aim is the selection of the CE by universal suffrage, upon nomination by a broadly representative nominating committee in accordance with democratic procedures. The 1,200 people on the nominating committee are selected from four broadly representative sectors across the community that have most of their members elected by their constituencies in the respective sectors in Hong Kong. Hence, it is simply wrong to say that the nominating committee members will comprise candidates hand-picked by Beijing.The implementation of universal suffrage for the CE election will require amendments to the existing election method. Annex I of the Basic Law also clearly stipulates that any amendments to the method for selecting the CE must be endorsed by a two-thirds majority of all the members of the Legislative Council in Hong Kong and reported to the the Standing Committee of the National People’s Congress for approval.

Your Oct. 6 edition of “The Quiz” asked: “What is the only province that doesn’t celebrate Canada Day as a statutory holiday, as Memorial Day is observed in its place?” The answer listed is Newfoundland and Labrador. In fact, July 1 is marked as both Memorial Day, as well as Canada Day in our province. On July 1, before noon, Memorial Day is observed and commemorates the sacrifices of the Royal Newfoundland Regiment at Beaumont-Hamel during the Battle of the Somme on July 1, 1916. It is observed concurrently with Canada Day, with Canada Day celebrations starting after noon, with one exception: We welcome Canada Day for the country with an annual sunrise ceremony on Signal Hill, overlooking the most easterly point in Canada.

About that picture we didn’t run

In your Oct. 27 issue, there was not one picture, nor even mention, of Justin Trudeau. Thank you, thank you, thank you. For a considerable period of time, your magazine seemed to be totally devoted to promoting him, to the point that I considered it as simply Liberal party propaganda. Keep up the good work.

As someone who volunteers in an immigration centre, I believe we need to focus on ensuring the immigrants that are already in Canada have decent jobs (“Why it’s time for Canada to grow up,” National, Oct. 20). I see the chemical engineer from Colombia working in a grocery store. The Mexican marketing degree has translated into a job at the dollar store. The Iraqi architect will be lucky, in the short term, to drive a taxi. All of these people speak English and have experience. How many of the 258,000 immigrants we accepted in 2013 will be able to find jobs in their field (or any field) and be able to support their families adequately without searching for years?