Letters: 'What a country! Even our scandals are boring.' 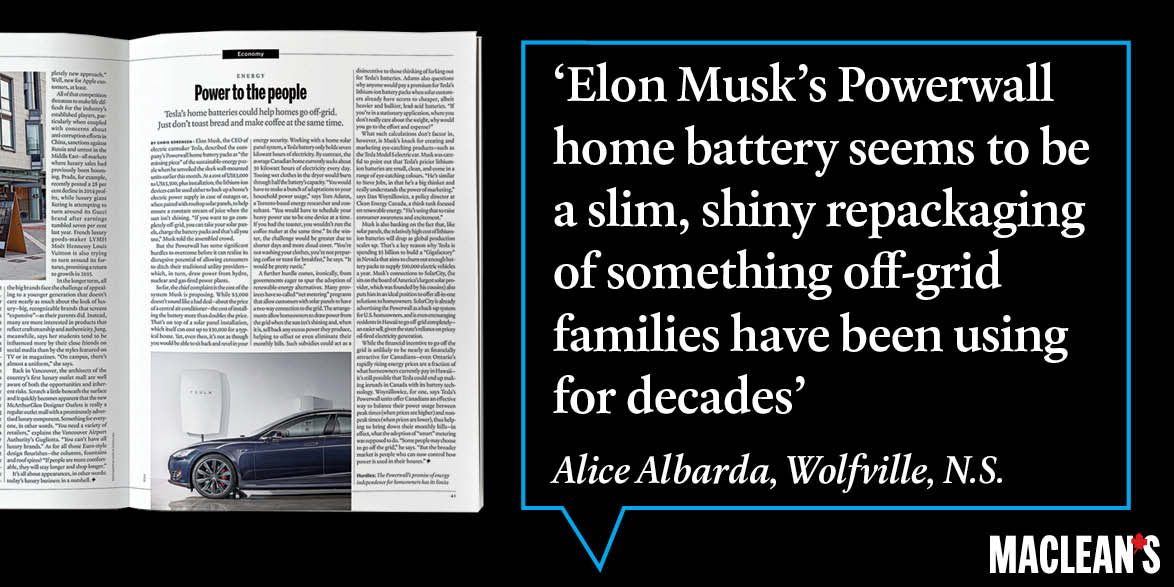 I have skimmed coverage of the, ahem, Duffy scandal in Maclean’s and other media (“The Duffy diaries,” National, June 8). No mention of Swiss bank accounts or the Cayman Islands. No Mediterranean cruises on an oligarch’s yacht. No strip clubs in Vegas. No packages of powdered milk from Colombia. No Avro Arrow swathed in saran wrap in a cave near Kaladar, Ont. No mention of Mike Duffy being seen having a beer with Jimmy Hoffa and Elvis Presley. What a country! Even our scandals are boring. However, the bit about the Kerry blue terrier was interesting. Not interesting like Silvio Berlusconi, Imelda Marcos or Kim Philby; more interesting like Richard Nixon and Checkers, without the Nixon part.

“We can’t have a world where, just because a whole bunch of people don’t like you, that’s grounds for firing you,” says a Vancouver lawyer quoted in “He’s fired. Who’s next?” (Economy, June 1). Really, how do you think you are hired? Why blame corporations that rely on public consumption of goods and services? Had it not been for the response of the people who purchase these services, those you refer to in your article would not have been fired. Corporations have an obligation to listen to the public response to their employees’ behaviour, just as they do the response to the goods and services they offer.

Can somebody please fetch Charlie Gillis a dictionary? Because he is clearly struggling to differentiate between private and public. He writes about the injustice of Shawn Simoes’s termination as if Hydro One had planted a camera in Simoes’s bathroom and caught him mumbling sexist slurs to himself in front of the mirror. Simoes not only condoned, but contributed to the sexual harassment toward Shauna Hunt in front of a news camera. I highly doubt that he was unaware that the camera was rolling. Thus, the incident has absolutely nothing to do with an infringement on Simoes’s private life, because there was absolutely nothing “private” about it. Gillis ominously adds, “The boss is always watching.” Watching what? The evening news as his or her employee was broadcast across the entire nation? I’m sick of the “poor him, we all make mistakes” drawl that seems to be the response when any man is punished for sexual harassment. It is time we realize that this everyday sexual harassment stems from ingrained societal sexism and misogyny, and needs to be met with actual consequences.

Shawn Simoes demonstrated a bold confidence by saying what he said so publicly, which suggests to me that he has behaved in such a way for some time, and has not experienced much, if any, negative consequence in the past. As for his dismissal, that is between the individual and the employer. Perhaps there is similar history there, perhaps not. We cannot expect anonymity in a public space, virtual or otherwise. If you can’t stand to suffer the consequences, consider behaving yourself.

Charlie Gillis refers to a case in 2007, where an employee was fired for having a website with aggressively racist content; he calls the employer’s decision to fire the employee “a no-brainer,” whereas the other cases he writes about are somehow controversial. Why is FHRITP any less heinous? We are so accustomed to sexism, we think it is less destructive than racism, but it isn’t. As citizens, we owe Shauna Hunt a debt of gratitude for confronting such an abhorrent trend in misogynistic behaviour.

How you describe something reveals your standards. To my mind, Shawn Simoes did not get fired for sexist taunting. Wouldn’t that cover things like, “Go back to the kitchen”? He was fired for sexual harassment.

Regarding FHRITP (“ ‘Come on, again? Again?,’ ” Economy, June 1), Camille Paglia’s words a generation ago, in her 1994 book Vamps and Tramps, were prescient: “We want masculine vigour, and I’m afraid that, in order to get men macho again, we may have to endure a certain amount of instability in sexual relations . . . My advice to the sexes at the end of the century? I would say to men: Get it up! And to women, I would say: Deal with it!” FHRITP is rude, it’s crass, it’s certainly unstable, and is definitely macho—kind of exhilarating, in its own overgrown, adolescent way.

Barbara Amiel states that “drugs, alas, have to be legalized” (“Class, not race, is America’s real problem,” June 1). I could not agree more. Take a look at Portugal’s record since the country decriminalized all drugs in 2001. It has not fallen into a drug crisis; quite the opposite! Overdoses and rates of HIV infection are down, as is the use of marijuana, cocaine and heroin.

If you build it, bees will come

In “Secrets of bee hotels” (Society, June 1), you picture a veritable luxury condo for bees. For the less-handy man, there is an alternative that worked well for me. In August 2013, a friend drilled 36 holes in a two-by-two-foot-long piece of scrap wood, which I hung on a roof over a south-facing wall. It was fully occupied by non-stinging, solitary leafcutter bees in three weeks’ time. They hatched in July 2014, cleaned out their holes and started a new cycle. In early July 2014, I added a 26-inch length of 4×4 with 130 holes, into which I inserted lengths of drinking straws. Thirty holes were occupied by mud daubers, the rest by leafcutters. Even several nail holes are in use.

Don’t wait for an ‘Arab NATO’

To date, as there do not appear to be any concrete steps being taken against Islamic State by the so-called “Arab NATO” (The Editorial, June 8), it is time for the United Nations to take action in areas controlled by Islamic State. After the fall of Ramadi, west of Baghdad, it is paramount that the UN Security Council unanimously adopt a resolution under Chapter VII of the UN Charter, to authorize a peacekeeping force such as that passed on Dec. 20, 2001, creating the International Security Force (ISAF), to assist in Afghanistan in that peacekeeping mission. To date, one of the resolutions on the part of the UN against Islamic State was to condemn strongly their actions and those who support them.

Your letter-writers seem to think Omar Khadr has a “humble, forgiving persona” (“A warm welcome,” Letters, June 8). Give me a break! He is an admitted murderer. He maimed another. Accusing the Prime Minister of having hate in his heart? Give me another break. It is the jihadis of the world who hate. The Prime Minister believes, rightly, that if you do the crime, you should do your time. This is no vendetta. Instead of being ashamed of being Canadian, you should be ashamed of yourselves. In my Canada, we applaud those who dedicate their lives to the country and we condemn those who commit acts of murder and terror. I want nothing to do with your letter-writers’ version of Canada.

Get off your high-heel horse

Emma Teitel, in her June 8 column (“In Cannes, both kinds of heels”), ludicrously asserts: “High heels may be stupid, unhealthy and impractical. But so is everything that makes life worth living.” Teitel appears to suffer from too much superficial urban sophistication and not enough real life. I wonder if she hasn’t experienced, of late, a pair of hummingbirds dancing through the sky, or an excited little girl jumping up and down while telling about her day, or the satisfying sense of fulfillment after an honest task well done. Maybe Canada should consider whether there’s any merit to China’s old system of having all intellectual types do a stint in the country to shovel manure or grow carrots to bring them down to earth. Some of us rural folk find life very much worth living, while we go about in our unfashionably low heels, surrounded by the love of family, friends and a community, in an environment of great natural beauty. Hey, that’s what she needs: a long stay in Nova Scotia’s Annapolis Valley.

Whenever I hear about the new Tesla battery (“Power to the people,” Economy, June 8), I look over at the battery box at my parents’ house and wonder what the big deal is. Elon Musk’s Powerwall home battery just seems to be a slim, shiny repackaging of something off-grid families have been using for decades. My family has lived off-grid, thanks to solar power, for my entire life, and thanks in part to some big lead-acid batteries that are attractively concealed in a wooden window seat. While we do have to make some sacrifices, I wouldn’t describe our lifestyle as “rustic.” Yes, we can “toast bread and make coffee at the same time”—on our wood stove! We could also fry an egg, bake a pie, and heat our house at the same time, if we wanted. Going off-grid means making a lot of changes to how you do everyday tasks, but I think that, if we want to live in a sustainable society one day, everyone is going to have to make a lot of changes. Do we really need all those kitchen appliances anyway?

Chris Sorensen and the “energy consultant” he quotes ignores the fact that up to nine Powerwall units can be used together, giving a total daily capacity of 63 kWh. They also ignore the fact that Powerwall units are wall-mounted and take up very little floor space (as opposed to lead-acid batteries, which require their own room and add to the cost of the house). Finally, they ignore the trillions of dollars that have gone into building and maintaining the current power grid. British Columbia, for example, has just committed $8 billion to build the Site C dam on the Peace River. For that amount of money, a good portion of the houses in B.C. could be outfitted with solar panels and Powerwalls.