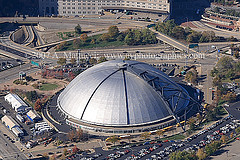 That’s right, folks. The biggest Ball of Them All (six-three, to Frisco’s five-foot-nothing) is holed up in the Mellon Arena dungeon (aka the “Print Media Lounge”) in hope of catching a glimpse of Sid the Kid. Game 6 of the Stanley Cup Final promises to be a dandy, after Petr Sykora’s triple OT heroics on Monday night. And hey, they let us in! There must be some mistake…

• Fear and loathing over refereeing reigns. Detroit coach Mike Babcock teed off yesterday over a couple of goalie-interference penalties called against the Wings during overtime. Neither resulted in the deciding goal, but hey, who knows what might have happened if Zetterberg and Cleary hadn’t lost four of the 54 minutes of extra time? Notice Babcock’s pissy reference to “the other guy,” namely Pittsburgh skipper Michel Therrien, who’d spent the past few days beefing about subtle obstruction on the Automatons part.

First, Therrien laughed it off. “I’ve been going around this morning introducing myself as the other guy.” Then, in the true spirit of the game, he counter-punched, noting that the refs had been just as over-zealous protecting Wings minder Chris Osgood. “[Babcock] is complaining about calls and we’re complaining about non-calls,” Therrien said. “Obviously, he didn’t have a problem when Osgood got bumped and fell down on Ryan Malone. I didn’t hear any complaining about that.”

• No line-up changes for the Pens. That means Sergei Gonchar, who left Game 5 with what appeared to be a wrenched back—yet returned to assist the winning goal—is playing. So is gritty Ryan Malone, who took a point shot to his schnozz, yet claims there are “no fractures.” Which is to say, no new ones. Big lift for Pittsburgh. Then again, says Sidney Crosby, this is the Stanley Cup Final: “It doesn’t surprise me. Unless they’re physically unable to get out there, they’re going to play.”

• Someone asked Crosby if he had determined whether he would drink champagne should the Pens win the Cup, not being of legal age in and all (it’s 21, and Crosby’s 20). Jesus, talk about an invitation to jinx yourself. Ever brilliant in the tap-dancing department, the Kid fobbed it off with clichés about having “a long way to go.”

Wings are on the ice now. Stay tuned.