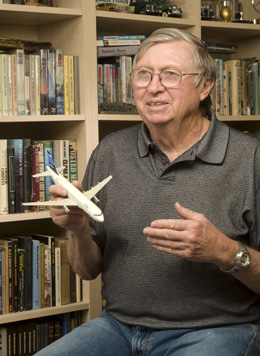 Q: You’re known as the “father of crew resource management,” which is credited with dramatic improvements in aviation safety. Capt. Sullenberger, the pilot who safely landed on the Hudson River, was involved in implementing CRM training at USAir. What is CRM, exactly?

A: It’s the application of human factors to flight and aviation, the study of how humans interact with each other and machinery that may or may not be very friendly. What I really do is social psychology in the aviation setting.

Q: Is Sullenberger a hero?

A: I’m sure he doesn’t think of himself as a hero—most pilots who perform splendidly in crises don’t think of themselves that way—but it’s reassuring to the public to think of him that way. One thing he did that was particularly good was setting a tone for the passengers. A lot of the time, pilots are so involved in managing a crisis that they tend to forget they might have a couple hundred people in back who are in a state of panic.

Q: How did he set the tone, by staying calm?

A: By communicating, period. I was in an inflight emergency once; we lost pressure and were making an emergency descent, and not one word was said. Though nobody overtly panicked, it scared the hell out of everybody. People thought we were going down.

Q: The oxygen masks came down?

A: Yes, and that tends to get your attention. You’d like to know why!

A: A double failure is an incredibly rare anomaly. It happens when you run out of fuel, of course, but I can’t think of a mechanical event, like a bird strike, that’s caused both engines to fail.

Q: Don’t manufacturers actually test their engines by throwing frozen poultry into them?

Q: So what happens in the cockpit when the engines fail?

A: First thing you do is try to restart, which is what the co-pilot did, but it wasn’t going to happen; they were too low, among other things. At the same time, you’re looking for the first suitable airport, which in this case was too far away, which is why the pilot made the correct but scary decision to ditch on water.

Q: Why is that so difficult?

A: Water is pretty damned unforgiving. If you hit water in an airplane, it’s like hitting a brick wall.

Q: I would think hitting the ground would be more unforgiving.

A: It’s about what happens afterward: you get penetration in the hull, and the plane is going to sink. You have to get the passengers out so they don’t drown. In a forced landing [on ground], even off a runway, you typically can step out, so you don’t have the same type of crisis. The pilot was really lucky it was a river and not the Atlantic. Wave action would have increased the risk enormously.

Q: How often does a pilot in an emergency situation just lose it and start panicking?

A: It’s really rare. Only two times come to mind, both in the ’80s, once in Asia and the other was in Africa.

Q: Any parallels to the USAir incident?

A: There’s one in Canada, actually, that involved absolutely splendid piloting and saved a lot of people. It’s known as the Gimli glider, because it happened in Gimli, Manitoba, in 1983. There was confusion about whether they were using the metric system or not when they put fuel on board, so the poor pilot ran out of fuel at 41,000 feet, with nowhere to go, and managed to land on a drag strip while a drag race was going on.

Q: What’s going on in the cabin when a plane is going down? You’d imagine chaos, though passenger accounts from the USAir flight suggest it was pretty quiet.

A: I think we sell people short. People tend to support each other in these types of incidents. In the inflight emergency I was involved in, people were very supportive, looking to help passengers with kids, and everybody was pretty altruistic.

Q: I’m sure many of the USAir passengers were convinced they were about to die. Do pilots generally think that too?

A: No. One of the things stress does is give you tunnel vision: you focus on managing the airplane, and peripheral things just don’t bubble up to the surface. And remember, their training is terrific. So much of airline training, for both flight attendants and pilots, involves putting them in simulated emergencies and letting them see how they behave and how they manage it. Even though the USAir crew hadn’t trained for ditching, they had years and years of training in coping with emergency situations. I’ve spent a lot of time in the simulator when crews get thrown amazing things. There was a program at one airline that everybody decided was designed by a sadist: they kept giving crews minor emergencies, and if they managed them well, they got more, so the graduation exercise was the loss of all engines. I think that kind of training really does prepare you to say, “I can handle this.”

Q: But you know it’s a simulation.

A: But you know how you performed, and that’s significant. One of the concerns in some training is that if a crew actually does crash an aircraft in simulation, it can have long- term negative effects, and a lot of times the people managing the simulation will try to manipulate things so it doesn’t go that far. It’s a pretty horrific experience, even in a simulator. For one thing, the simulation is such high fidelity that you tend to lose track of the fact that the darn thing is anchored. I’ve seen crews come out of these things with sweat dripping, really stressed out because it feels so real. And there’s also the realization: if that had not been in a simulator, it would’ve been terrible.

Q: In a forced landing, how do the pilots brace for impact?

A: They are in shoulder harnesses, restrained in their seats. You don’t want them to brace, you want them looking out and steering! There’s been pressure to have the same kinds of safety restraints for passengers, by the way, and I think it’s a great idea. Why not? We’re all used to doing it in our cars.

Q: When the plane lands after an incident like this, is there a stampede for the exits?

A: People are generally extremely well behaved. They’ve been briefed, they know where the emergency exits are. I can think of only one incident of panic, in Saudi Arabia, but the plane was on fire.

Q: But people sometimes stampede for concert tickets. Why do they behave better in a life-or-death situation?

A: I think that those safety messages at the beginning of the flight really register, even if you’re sitting there reading Maclean’s when you should be listening to the flight attendant.

Q: Why do some people waste time grabbing their hand luggage?

A: I don’t know. Unless you have diamonds or unregistered securities in your bag, I’d say to heck with it.

Q: A lot of passengers have the idea that flying is pretty routine, the plane is on autopilot most of the time, the pilots are doing very little. But that picture isn’t very accurate, according to your research.

A: No, it isn’t. Certainly if you’re flying from Houston to Tokyo, there’s a lot of boredom while you’re over the north Pacific with nobody around, but nevertheless there are a lot of things you have to attend to: crew, systems. It isn’t just dozing for dollars.

Q: What is the Line Operations Safety Audit?

A: It’s something we designed at the University of Texas in 1993, to systematically observe how crews practise what they’ve been taught. We put an observer in a jumpseat in the cockpit to record behaviours and everything that was going on, while giving crews an absolute guarantee that everything observed was confidential. As a result we got a pretty remarkable database on behaviour. Now airlines are all supposed to do this, to take a snapshot of their operations without jeopardy for their pilots.

Q: Your data shows that 98 per cent of flights face one or more threats, with an average of four threats per flight. What is a threat?

A: Anything that should require attention from the crew, and which decreases the margin of safety. For example, bad weather and mechanical anomalies like losing hydraulics are a threat. It’s important to recognize that even on a calm day, a lot of things can go wrong. What I see crews doing now that’s very healthy is talking at briefings about “What are the most important threats on today’s flight?” That’s gone a long ways toward helping crews face all of those situations.

A: There’s a lot of debate right now about the actual number of bird strikes. I can only remember about three, none of which were serious enough to shut down an engine, much less two. I remember one flight at Continental where a bird came through the windscreen, so they made an emergency descent with oxygen masks. It was pretty awful, feathers everywhere.Q: Your data shows that 70 per cent of commercial pilots have reported near-misses, and that 82 per cent of flights involve errors, with an average of 2.8 a flight. What’s an error?

A: An action or inaction by the crew that changes the safety margin, like missing an item on a checklist, or mis-setting altitudes or radio frequencies. The brilliant thing is not that there are so many errors, but that errors are managed so well.

Q: Are you concerned about the increasing automation of aviation?

A: There was a time, back in the mid-’80s, when one manufacturer said, “Automation will eliminate human error,” which was probably as dumb a statement as anybody ever made. Automation has changed the nature of error, it hasn’t eliminated error. Back in the days of the Wright brothers, the errors were very simple: I mishandled the stick and rudder. Today you can set the automation improperly. But overall, automation has been a great boon to safety. In fact, some of the systems that provide an envelope of safety actually helped Capt. Sullenberger control the airplane; it wasn’t completely dead.

Q: How do younger pilots, who’ve only flown completely automated aircraft, hone the kinds of old-fashioned stick and rudder skills that helped him land safely?

A: That’s been a concern of mine for years. I’ve always advocated that pilots disengage the automation and fly it like a Piper Cub for a while. It’s really more fun doing the stick and rudder stuff than pushing a button on an electronic flight instrument system.

Q: The mandatory retirement age for pilots is 60 in the U.S., so Sullenberger only has a couple of more years. But isn’t he more qualified in an emergency than a younger pilot?

A: Absolutely. And once I entered into geezerdom myself, I became much more of an advocate of “let the old farts keep going!”