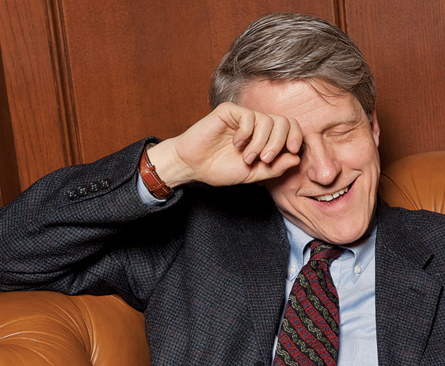 Robert Shiller is a professor of economics at Yale and the bestselling author of Irrational Exuberance, in which he predicted the collapse of the stock market. He was also one of the first economists to accurately foresee the devastation that would follow the subprime mortgage crisis. In Animal Spirits: How Human Psychology Drives the Economy, and Why it Matters for Global Capitalism, written with George Akerlof, he argues that today’s markets are as much driven by human psychology as by finance. Shiller uses the idea of “animal spirits,” a term invented by revolutionary economist John Maynard Keynes, to describe the powerful effect of human emotion and confidence on the economy, and to push for more government intervention and bigger stimulus packages in the U.S. and Canada.

Q: Looking at what’s going on out in the world right now, with all the greed giving way to fear, are we surprised at the notion that the economy’s being driven by “animal spirits”? We can see it all around us, can’t we?

A: Depends on who you talk to. There is definitely an element of human thinking that’s resistant to that idea, especially in the economics profession, because the history of economic thought has tended to emphasize the rational side of human behaviour and it tends not to be aware of or even think about social psychology and culture. Economists’ favourite thing is to talk about the central bank and that’s it, that’s what they’re expert on, so that’s what they think about. The idea that there’s ever some sociological change, a shift in the culture that’s driving the market, is just foreign to economists’ thinking, so they miss it.

A: People who go into economics, in modern times, tend to be people who are good at math but didn’t want to be engineers or physicists, and so if you have that talent, what do you do? You go into economics. You can’t get a Ph.D. without going through an intensively mathematical program. That’s the hurdle you have to pass. It’s kind of like a hazing to get into the profession. I think there are different mental faculties, there’s a math—quantitative—faculty, and then there’s a human judgment faculty, and some people are good at one and some people are good at the other, but the economics profession is designed to attract the quantitative. It’s not to say that these quantitative skills aren’t important, it’s just that we tend to emphasize that a little bit more than is healthy.

Q: Tell me more about the particular animal spirits, it’s not just one sort of vague, amorphous force—you’ve dissected the individual spirits quite thoroughly in this book.

A: Well, one thing that really drives the economy is the sense of opportunity that people get at certain times, the sense that this is a good time to start a business, the sense that I can take a long shot now, and I have to move fast because otherwise I’ll be overtaken by other people who are more on the spot, and that drives the economy to a fervent degree, and it’s exactly that sense that has disappeared now. It changes slowly, through a diffusion of ideas, like a social epidemic. Ideas spread the way jokes do. You know, someone invents a joke and it just spreads through millions of people by word of mouth. In the same way we have changes in ideas about what the economy means to us and how we fit in to it.

Q: What role did animal spirits play in leading us into this mess we’re in now?

A: Certain ideas, the idea that stock market investing is a road to riches, and then later the idea that investing in housing is a road to riches. These things infect our thinking on not only decisions about which investment to make but decisions about our lives. The last decade or so has been a time when we’re re-evaluating who we are and what is our purpose. The idea that we are smart investors in a capitalist world has been taking hold. The idea that, say, labour solidarity is important and that we want to be a good, dedicated teacher or nurse or something like that is somewhat diminished. We imagine ourselves to be capitalists on some level, even though recently it’s challenged by a sense of anger at capitalists who are making big profits when the economy is going down the tubes, but we did have kind of a gold rush mindset.

Q: This decade began with a tech bubble, yet we’d barely recovered from that before we were in the midst of a real estate bubble. One can see the same sorts of animal spirits, the same psychology, behind both of those phenomena. Why didn’t we learn from the first bubble?

A: People get into habits of thinking about the economy. The changes in our thinking that led to the stock market bubble just naturally extended to the real estate bubble. One example we use in the book is another book that came out in 2004, at the height of the boom, advocating real estate investment. The interesting thing was that the book was advocating real estate investment without any argument. It never explained why it’s an almost sure thing that you’ll make profits in real estate investment. It didn’t even mention the possibility of a real estate bust. It assumed that the reader already knew real estate was a sure thing, and that real estate prices can only go up, and the book was full of stories of people who found a new life or the excitement of investing in real estate. “Hey, I can get a home in Florida and I’ll get rich in the process, and other people are doing it, so I’d better hurry.” That’s the level at which a social epidemic moves. People who wouldn’t think of buying a house in Florida—it’s far away and unfamiliar—suddenly get this sense of confidence by seeing a lot of other people doing it, and a sense this is what the smart people are doing, so I’ll do it too.

Q: You mention in the book that this recent boom was accompanied by an epidemic in poker playing. What does poker playing have to do with the state of the economy?

A: One thing that has happened in recent years is a wave of gambling, not just in the U.S. but all over the world. Casinos have been opening up everywhere. Fifty years ago, lotteries were considered immoral or inappropriate. And now poker has become a legitimate spectator sport—that represents a real change. I may be over-interpreting this, but Texas Hold’em and other forms of poker are games that simulate aggressive, selfish personal profit pursuit. Poker is about bluffing, it’s about being dishonest, in a sense, and it’s not a family game. We compared it to contract bridge which flourished in the Great Depression. Bridge is different, it’s a partners’ game, so you have someone with you in it, and they don’t generally play for money.

Q: You argue as well that financial bubbles tend to be accompanied by corrupt and antisocial behaviour in the economy, hence the many financial scandals in recent years. I’d have thought that bad actors are just as prevalent in good times or in bad, but that they simply have more room to play in good times.A: In good times people are more willing not to do due diligence. They think they have to get in fast to stay ahead of the game and they have a sense that other people aren’t doing due diligence, so they go along with it. It’s a time of trust and that becomes a time of opportunity for hucksters to do things, or if they aren’t hucksters at least people who are not really acting in good faith. Afterwards, when the confidence slips, people fall into a different mode: “You can’t trust anybody, and I’m not going to do anything because I’d have to do all this research to figure it out and I’m never going to do it.”

Q: When the economy hits the wall, people despair of their financial futures. Those psychological factors are every bit as dangerous to the economy on its way down as over-exuberance can be on its way up, no?

A: Right, and the problem that is not recognized very much at all is that this fearfulness and this sense of lost opportunity is a basic parameter of our thinking, and so it doesn’t swing back fast. We may have a recovery, and the recovery may look optimistic for us, but there’s a real possibility that any recovery we have will not bring us back to ripping prosperity, because our confidence is damaged. We’ve changed a basic assumption. Just as the real estate boom of the 2000s was a consequence of the stock market boom of the ’90s, so too we may have on the other side of it a period of slow economic growth for years, a recovery, maybe, but not a strong recovery, because of our changed attitudes. Everywhere around the globe people are concluding this just isn’t the time to be starting a new business, or hiring people, or investing in expansions. People think that we’re not in good times and that is a self-fulfilling prophecy, and it’s hard to get out of it.

Q: At present we have central banks and governments throwing a lot of money at the economy in order to give it a goose and improve confidence and dispel this prevailing mood of gloom. Is that the correct way to dispel the negative spirits?

A: Well, the problem with stimulus is that it brings up national debt, and if it doesn’t work we’re left with a bigger national debt, and so it’s a risky strategy. It has to be pursued but it’s risky. Unfortunately the political process doesn’t encourage the taking of such risks, and so there’s a tendency all over the world to under-stimulate. In Canada, the Harper government has created a stimulus package but it’s small change, and that is not big enough. Similarly in the U.S. we had a stimulus package earlier this year of $787 billion. Again, it’s not enough. Even with the White House’s optimistic forecast of what the effects will be, it’s not enough,and the situation looks worse than just a couple months ago when they created this stimulus package.

Q: Aren’t people always going to overreact in both positive and negative ways? We’re going to tell each other stories that whip up our confidence, and then we’re going to scare the hell out of each other when things go badly—isn’t that human nature? How does the market organize itself in order to deal with our shortcomings?

A: It’s important for policy makers to understand aspects of human behaviour. That doesn’t mean that it’s a simple matter, but any politician has to be a psychologist, and anyone who’s trying to manage public confidence has to understand psychology. Still, the main tool for managing confidence is not talk, it’s action. That’s why we need stimulus packages. One thing that we learn from the study of psychology is that ideally a stimulus package should come on strong before anything serious really happens, we want to apply the stimulus before massive numbers of people are laid off, because once they’re laid off it creates a different psychology that’s hard to correct. We’ve already missed that opportunity substantially, but of course I think the unemployment rate is at risk of going much higher. We still have an opportunity now to stop the worsening of this crisis.