Manny Ramirez to play for the Blue Jays? 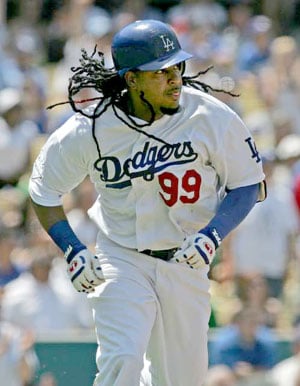 I’ve heard a lot of crazy rumours in my time when it comes to Toronto’s sports teams. There was the one about Gretzky signing a deal to play for the Leafs in the mid-90s, and now it appears that a few “insiders” are predicting that the Blue Jays might actually pursue Manny Ramirez this off-season. Manny would greatly help a lackluster Blue Jays offence, but at a price tag of somewhere in the neighbourhood of $25 million per season, this rumour seems about as likely to become a reality as Wayne Rooney leaving Manchester United to play for Toronto FC.