Mark my word, this could get interesting.

So remember the controversy last year when the iconic Canada wordmark – the official symbol of the Government of Canada – showed up on anti-abortion banners at the annual March for Life event on Parliament Hill? Purely accidental, claimed Campaign Life Coalition president Jim Hughes, who blamed the whole thing on a volunteer who was “unaware of the copyright issues”:


Hughes … says that CLC is more than happy to remove the wordmark from the banners, and will do so immediately. “If I’d known that there was a logo representing the federal government on the signs,” said Hughes, “I would have had it ripped off because of the continuous support by the federal government for the killing of two million children in this country.”

But, as the Canadian Press reported at the time, the unauthorized appearance of the wordmark at the rally was enough to trigger an investigation by Treasury Board, which is responsible for the Federal Identity Program that regulates use of the wordmark and other protected symbols:

The spotlight shone on the banner resulted yesterday in the Treasury Board Secretariat launching an investigation into whether the logo was used illegally. “The secretariat investigates all complaints and queries related to the use of official symbols, which are protected under Canadian copyright and trademark law,” spokesman Robert Makichuk said.
“They can only be used with the government’s permission.” If, as appears to be the case, the anti-abortion activists who created and carried the banner did not have authorization to use the logo, Mr. Makichuk said they’ll be asked to “cease and desist.” If they refuse, he said, the secretariat will consult legal counsel for the appropriate course of action.

Fast forward, though, to this year’s march … and there it was again: 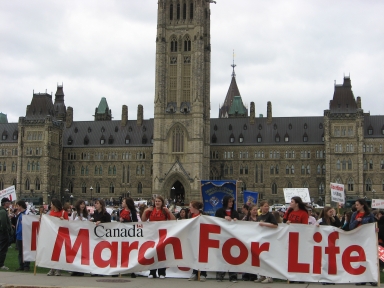 In an interview with Inside the Queensway, CLC national organizer Mary Ellen Douglas called the whole thing
“ridiculous,” and insisted that she never even saw the sign — she was too busy with the “eight thousand people” on the Hill for the march. She repeatedly excoriated the media, in general, and ITQ, specifically, for ignoring the “real story”, and instead focusing on a “tiny little sign” (that, we should point out, was
on a banner that required nearly a dozen ralliers to carry); she blamed the oversight on the “sign printers”, who, she said, were “asked to remove it,” but “accidentally left it on.” It won’t be there next year,
she said.

As for violating TBS policy, she says that, as far as she knows, the department hasn’t complained about the use of the logo at this year’s march.

So what happened? Did the government decide to let CLC use the logo after all? Not according to Treasury Board. Speaking with ITQ last week, Treasury Board spokesperson Robert Makichuk said that the department had, in fact, issued a cease and desist letter to Campaign Life Coalition following last year’s event, and had “received confirmation from the senior organizer” that the logo would be expunged from any and all banners and other rally material.

According to Makichuk, The department is currently looking into the return appearance of the word mark at this year’s event, and is currently in consultation with legal counsel about what, if anything, to do next. The final decision, he says, will be made by “senior management” at TBS. It’s not clear whether that would include the current minister, Treasury
Board President Vic Toews – who has been an outspoken opponent of abortion in the past, and, as minister, would presumably have some role in deciding whether or not to proceed with legal action. Really, though, he may have enough on his mind already.