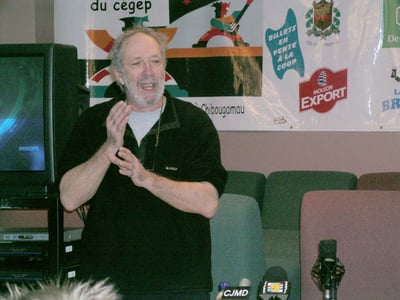 “If you aren’t with us, you are an asshole!”

Last week, Quebec filmmaker Pierre Falardeau used his inaugural column in Ici Magazine to call David Suzuki a “bearded little Jap.” Mr. Suzuki’s alleged transgression was to have said–in Montreal and, horror of horrors, in English–that he was “disappointed” in Quebecers for having voted Conservative in the recent federal election. To wit: “A bearded little Jap, another bothersome shit from the west coast, a veritable Professeur Tournesol of the environmental movement, stopped in Montreal to tell us, in English, that he’s disappointed with Quebecers. Stay at home, you, and leave us be with your colonialist scorn.”

It was pretty a pretty tired, as far as Falardeau goes. The man who used to pursue real colonial types–Le Temps des Bouffons is one of the more eloquent bursts of scalding outrage I have ever seen–is apparently now content with vapid sequels to past glories. In between these non-efforts, he excoriates politicians well after they’re dead (classy, and less lawsuit-prone!) and race baits world renowned environmentalists. Nice work if you can get it, I guess.

All of this should be music to Canada’s ears.

The sovereignist movement has made great–and, for the most part, genuine–efforts to open attract and be more receptive to Quebec’s recent arrivals. Erstwhile PQ leader André Boisclair and, especially, Bloc leader Gilles Duceppe have been unequivocal in support of ‘civic’, as opposed to ‘ethnic’, nationalism. “There is a place in the Quebec nation for everyone, regardless of origin or beliefs,” Duceppe said last year.

And yet these efforts, coincidentally or not, are constantly undermined, not by federalists but by the true believers themselves. Jacques Parizeau set his movement back a decade at least with one pithy, gin-soaked quote, and Falardeau does much the same with his pen. La Presse columnist Marc Cassivi, who wrote a scathing column about Falardeau’s bon mots concerning Suzuki, was unequivocal: “Because of him, I am sometimes ashamed to be sovereignist.”

Falardeau’s credentials are unassailable. Not only has he made several films, some of them even quite good, on the subject of Quebec nationalism, he is also a loud, ardent supporter of the Bloc Québécois and the Parti Québécois. He was La Société St Jean Baptiste’s ‘Patriote de l’année’ in 2002. He was regularly fêted at Bernard Landry-era Parti Québécois functions. These guys treat him like he’s the second coming.

Yet he hurts the very movement to which he’s devoted his life, just by opening his mouth. Just as sovereignists should be ecstatic at the spectre of another Trudeau leading the Liberal party sometime in the future–all the better for their recruitment drives–federalists should delight in having Pierre Falardeau barking up the nearest tree. “Every time he speaks, we lose a thousand votes,” a friend of the sovereignist persuasion told to me last night.

Keep talking, Pierre. Canada is stronger for it.