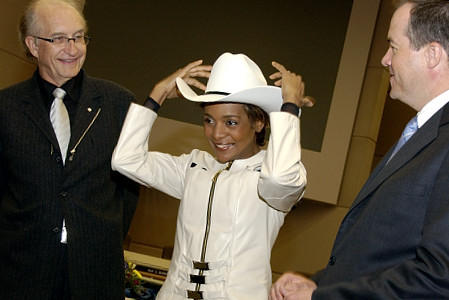 So Michaëlle Jean is in Paris this week, with plans to celebrate the 400th anniversary of the founding of Quebec City. The French media love Her Excellency so much – “The enlightened face of humanity, intelligence and beauty,” cooed Le Monde last weekend – that Little Sarko will likely use her as camera fodder, hoping some of that glitz rubs off on him as he ‘celebrates’ his first and rather disastrous year as French President.

Anyway, Jean has managed once again to infuriate Quebec nationalists by declaring the French president should “look beyond Quebec” to French Canadians outside the province. “There are a million of them out there fighting to save their language and their culture,” Jean was quoted as saying, in a Canadian Press article.

We here at Deux Maudits Anglais fully expect much frothing and fist-shaking from Quebec nationalists – though we’ll likely save it for the weekend, when we can at least enjoy the righteous anger over Marmite toast and a pot of cold tea. Already the nationalist message boards are awash with fresh criticism of Jean and her office, the “symbol of the defeat of the French in North America, the symbol of the conquest our assimilation and subordination”, according to one of the more fragrant posts.

Few figures enrage the Quebec nationalist more than our our sort-of Queen. Not only does she represent the dreaded monarchy, but Michaelle herself was once part of Quebec intelligentsia and, along with hubby Jean-Daniel Lafond, dabbled in sovereigntist movement themselves. (Not much of a surprise here: Unless your name is Charest or Chrétien, flirting with separatism is a necessity for all Quebecois politicians, federalists included.)

For all the froth, though, they have a point. The apparently rejuvenated Allan Fotheringham explored the absurdity of the Governor-General’s office in a pithy little thing in Monday’s Globe (warning: pay wall.) “Our Canadian smugness – no colonial hangovers here – ignores the embarrassing fact of our ‘head of state’ living far away across the Atlantic,” Dr. Foth wrote. “Good Queen Bess, a fine woman now in her 80s, will not too far away depart this blessed vale. It would be the proper time to say goodbye to Mummy England. Let’s grow up.”

There you have it: unbending nationalists and a scribbler from Saskatchewan find common cause in opposing the office of our Haitian-born, formerly sovereigntist representative of the Queen.