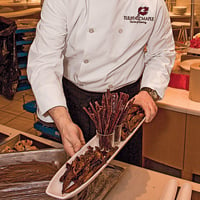 Give them meat, in bite-sized pieces
Prorogation was a big blow to receptions on the Hill. With Parliament again in full force the platters are being passed around once more. Groups holding events always want to get as many MPs out as they can. Good food creates a buzz, especially among underpaid staffers, who can sniff out a quality caterer and talk a party up to their bosses. (The prospect of good food can be even more motivating than the event’s cause.)

Two caterers who delight taste buds on the Hill are Tulips & Maple and Thyme & Again Creative Catering. Sheila Whyte, owner of Thyme & Again, says one of the big jobs is to help the client navigate Hill culture. Clients are often not aware that Hill maintenance people are seasoned at transforming a room from the venue of a Karlheinz Schreiber inquiry into an Israeli wine tasting or a reception for groups battling autism. “The maintenance people are amazing,” says Whyte, who recalls the year 300 litres of pumpkin squash soup tipped over and went down an elevator shaft. She makes sure to send them good Christmas gifts. Thyme & Again has been catering on the Hill since the ’90s. A typical request is “something to represent Canada” or the provinces. Some areas are easy: P.E.I. potatoes, Quebec cheeses. Some, such as the Prairies, are more of a challenge, says Whyte. She says prime ministers tend to not eat much at the few receptions they do attend. But there are cases when she’s been asked to put aside some food for a PM. Security has changed dramatically over the years: staff lists of who is working must now be sent in advance.

Mark van der Pas, the “visioneer” at the superb Tulips & Maple, which has been catering on the Hill for 18 years, says a key thing to have at receptions is meat. The reality, he says, is that most MPs and staff are men, and men tend to be carnivores. “They like beef on a bun,” he notes. The key to Hill receptions, van der Pas says, is to allow networking to occur. Small bite-sized portions allow for more schmoozing and keep MPs there longer. Also, he adds, the food must have bilingual signs. The recession has meant cutbacks on excesses such as shrimp trees and a move toward comfort foods, although comfort food here means macaroni and cheese “with lobster and good cheese from Quebec.” MPs are appreciative of the effort of caterers because their schedules mean a reception often ends up being their dinner. Also, adds van der Pas, “the higher they are up in the government, the more courteous they are to the servers.” 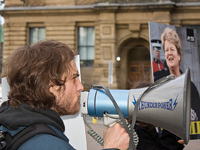 Who is stalking gail Shea?
Anti-seal-hunt PETA protesters are on the tail of Fisheries Minister Gail Shea when she attends Ottawa events. They continue to spread misinformation that baby seals are killed in the hunt, when it is actually illegal to kill the white-furred babies. One shaggy-haired protester yelling into a megaphone outside an event Shea was attending seemed obsessed with seal penises, repeating over and over that Shea is peddling seal penises to China. A spokesperson for the minister says there is no push for any one part of the seal. 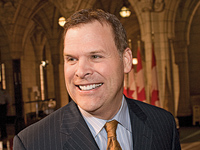 Why Baird likes to talk about Dalton McGuinty
Gerard Kennedy, the Liberal critic for infrastructure, cities and communities, can’t wait for Sheila Fraser’s stimulus spending fall audit. He is hoping an interim report from the auditor general will come soon. With billions of stimulus dollars pouring out of Ottawa, the hope is Fraser will uncover something to give the Grits some heavy election-worthy ammo. When Kennedy asks him questions, Transport Minister John Baird likes to stress he is working well with the provinces and in particular with “my Premier Dalton McGuinty.” Kennedy, we might recall, lost the top spot to McGuinty when the two battled for the leadership of the Ontario Liberal party in 1996. Kennedy led for four ballots before losing to McGuinty on the fifth.