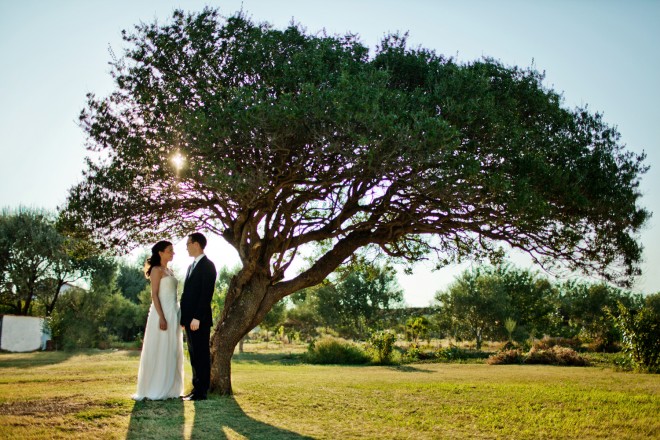 NDP MP Niki Ashton got married to Ryan Barker this month in a quickly organized wedding that took place in Alexandroupoli, Greece, where she has lots of family. “We couldn’t make any life plans until after the May 2 election,” says the MP, and “there is only one season to get married in Greece.” Ashton ordered her dress from the Ann Taylor website. One of her interns, who was also getting married, suggested she check out the site. “I really wanted to keep it simple and I don’t do poofy,” says Ashton. There were no speeches at the wedding. Her Greek family (her mother is Greek) told her that only “boring” politicians speak at their weddings. Ashton’s first language is Greek and she is involved with Canada’s Greek community although, in her Manitoba riding of Churchill, she quips, “there are only 12 of us.”

Ashton is not changing her last name: “I have too many election signs with my name on them to throw them away.” The Greek Orthodox church that married the couple asked them to fill out a form stating what the last names of their children would be. (Having kids is not a matter of choice there, she jokes.) The couple wrote down “Ashton-Barker.” Afterwards, there was a honeymoon in Greece and later Hong Kong, where Ashton had studied 10 years ago at the Li Po Chun United World College. The dates worked out so she could attend her 10-year anniversary.

Watch out Martha Stewart, this fall Canada’s upper chamber is putting out La Crème de la Crème: A Senate Family Cookbook. It will be sold through the Senate with proceeds going to the Government of Canada Workplace Charitable Campaign at the Senate. The GCWCC in the National Capital Region supports the United Way and Healthpartners. The cookbook will sell for $10. Several senators and Senate staff submitted recipes, including ones for “senator’s sizzling scallops,” creole rice and beans, Corn Flake pie, maple syrup tarts and chocolate dessert pizza. Details about who submitted which recipe are being kept more tightly guarded than a Jim Flaherty budget. One senator who was not asked to contribute couldn’t help wondering if it was a reflection on her cooking. A Senate staffer clarified that the request for submissions happened on a very short timeline.

There have been other cookbooks published on the Hill. In 2005, Senate pages put together one to help raise money for the Indian Ocean tsunami relief effort. That book included Stockwell Day’s recipe for “right wings.” The chicken-wings recipe advised readers not to be too “liberal” with the sauce.

The woman Jack said to watch

Halifax NDP MP Megan Leslie was first elected in 2008. At the time, Jack Layton described her to Capital Diary as a “future leader.” Her name is now appearing in the media as a potential leadership candidate. This summer Leslie has been studying French in Quebec City. In the past she took lessons at Saint-Jean-sur-Richelieu, a French-instruction place popular with parliamentary folks. This summer all the slots there were filled, though. After the last election Leslie became the NDP’s environment critic but was already up on her French environmental terms thanks to her partner, Brendan Haley, who is doing his Ph.D. in climate change policy and is researching in both English and French. Before the last election Leslie was the second-youngest MP in the NDP caucus. Now, thanks to the influx of NDP Quebec MPs, she gets to use her French even more, she quips, than just with the cafeteria workers on the Hill. She recently has been working with the Nova Scotia Bikeways Coalition on a project called “ride your riding,” which promotes bike safety, highlights the best places to pedal and advocates for more bike lanes. Perhaps Jack Layton recognized a kindred spirit.