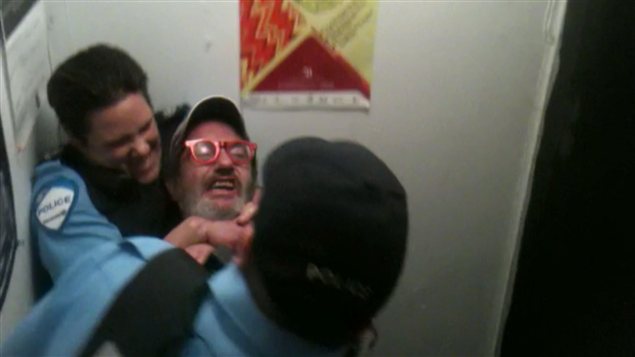 OK, so a bit of background. Yesterday, Radio-Canada had a cherry of a story about Stéfanie Trudeau, a Montreal police officer. Ms. Trudeau first gained notoriety during last spring’s student strikes, when she was filmed in full riot gear, casually hosing down demonstrators and passersby with pepper spray as though they were so many geraniums. The incident cost Officer 728—her badge number—her position on the force’s riot squad during the remainder of the protests.

On October 2, the officer “caught” a fellow beer in hand, opening the door to his apartment building for his friend. This ensued. Watch it. It’s astounding/stomach churning. Trudeau confiscated all the phones on the scene (save for the one filming the incident, évidemment) but accidentally hit the call button on one of them. 728’s epic tirade to her boss was caught on tape. She’s nasty, angry and profane, yet keenly aware of her own notoriety throughout.

Here is a rough translation of what she said:

“Then we managed to handcuff him, but during that time all the rats who were upstairs in… these guitar strummers, they’re all goddamn red squares [ed’s note: symbol of student protest], all these goddamn artists of, of, anyway they’re all shit eaters, so they all started coming out of the apartment, you know.

“Then we… we… I jumped on the goddamn asshole. Then, obviously, he resisted the neck hold, goddammit, I’m choking him, then I go down the stairs, we’re fighting with him in the stairs […] Then finally I had to raise the tone and I started going crazy, so that people go back upstairs, you know.

“Even if I wasn’t 728 they’re idiots anyways, you know it’s because they recognized me, it’s damn sure that I’m easily recognizable, they’re aren’t 12,000 women who fight […] No, I didn’t pepper spray them, but I was fucking close to it, I was close, I really fucking wanted to, but I told myself that if I did it I’d find myself in the headlines again.”

Mission accomplished, despite herself.