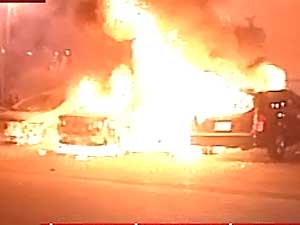 It was an ostensibly different story in Montreal North this weekend, though. Hundreds of rioters took to the streets Sunday night, most of whom were madder than hell at the shooting of Fredy Villanueva, an unarmed 18-year-old who was hanging out with his brother near the Henri-Bourassa arena north of the city on last Saturday. The ‘other’ rioters, as other rioters tend to do, took advantage of this anger to steal sneakers and t-shirts. One police officer was shot and injured. A fire station was vandalized. Several journalists were assaulted, including La Presse‘s Robert Skinner, who had his equipment stolen. And for what?

I’m already bracing for the inevitable knee-jerk comparison of Montreal 2008 to Paris 2005: You know, the death of a young person at the hands of the police in a poor, gang-ridden neighbourhood comprised largely of immigrants on the outskirts of a large French-speaking city. If you wanted an event that could immediately distill the towering insecurities harboured in Quebec –– towards the extent and scope of immigration, as well as the long standing belief outside Montreal that the city is a cesspool of vice and violence –– it came ready made the second someone decided fire and vandalism was an appropriate eulogy for Fredy Villanueva. Seems almost as hubristic as a hockey riot, no?