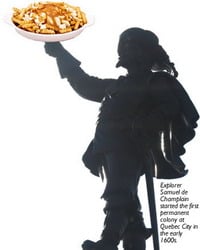 As far as slights are concerned, whether real or perceived, this one seems fairly innocuous. The Canadian embassy in Washington has apologized for posting an invitation to a Canada Day party that featured Samuel de Champlain holding a plate of poutine. The offending image has since been removed from the page, but that’s it on the left. (Why do I feel like I’m turning into Ezra Levant all of a sudden?)

Some complainants, however, aren’t willing to let it go. The French-language advocacy group Impératif français is calling for nothing less than an official apology from Stephen Harper, and the resignations of newly-minted Foreign Affairs Minister David Emerson and Canadian Ambassador Michael Wilson.

Bill Johnson better be thankful the folks at Impératif français apparently didn’t get their hands his recent op-ed in The Globe about St-Jean festivities in Montreal. If they found a strange non sequitur by the Canadian embassy in Washington offensive, who knows how they would have reacted to the former Alliance Quebec leader’s insufferably patronizing piece?

UPDATE: Andrew Potter beat me to it. And he has a better headline.