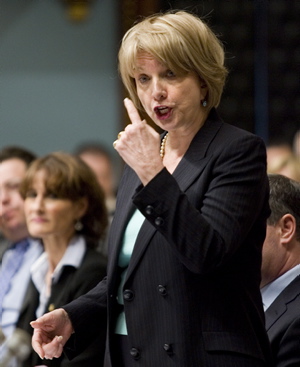 Monique Jérôme-Forget, Quebec’s finance minister, has retired. If there was any politician in recent Quebec history to telegraph her desire to cease overseeing the barrel of (often broke) monkeys that are the Pretty Province’s finances, it was her. Rumours of her retirement have been circulating for months, well before the last provincial budget–rumours the Charest government didn’t even try to swat down, as it is usually wont to do. If you were really, really cynical about politicians–God forbid–you might argue that Charest had accounted for Jérôme-Forget’s departure before the last election, when he knew the impending Caisse de Dépot storm and the resulting $40 billion in losses would inevitably need a fall guy–or fall girl, in this case. Also, Jérôme-Forget has a reputation for fierceness and extreme prejudice, and her continued presence would likely be irksome for Charest–especially as the years wear on and the eternally pragmatic premier will be looking to soften the edges of his mandate, if only for his eventual replacement.