We should not underestimate his capability to adjust, reset, and recoup the advantage in the healthcare debate 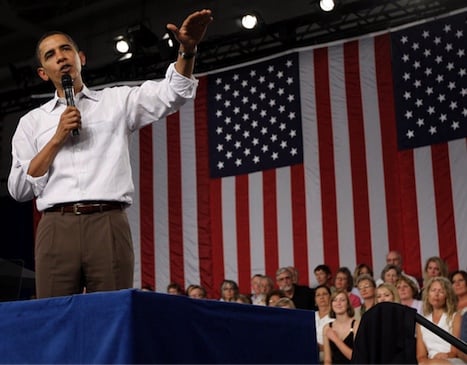 Over the past month, the healthcare debate has taken a dramatic turn for the worse if you are in favour of reform. The conduct at the town hall meetings has become an even greater topic of discussion than the actual content of the reform package, and opponents seem to have gained an edge. Barack Obama’s people may have made the right decision by involving legislators early in the process, but it did give opponents an opportunity to organize beyond the lobbyists and marketing agencies who derailed a similar effort in 1993. This time, “real” people are coming out to the meetings, conveying the impression that a grassroots movement is opposing Obama’s reforms. Polls are starting to reflect the impact of the protest, leading many to ask whether President Obama is in trouble. If he fails to achieve his number one domestic priority, what impact will it have on the rest of his first term? Could it mark the beginning of a Republican resurgence, a first step towards regaining control of Congress as early as 2010 and mounting a significant challenge for the White House in 2012?

In a recent interview with Time, Obama conceded that “this has been the most difficult test for me.” The conservative movement, with the help of Republicans in Congress and the support of right wing talk show hosts, has been leading the charge. The vaunted Obama electoral machine seems to have been caught off guard and has had to resort to putting Obama at the forefront of the debate in a bid to bring some kind of civility to the process. Obama’s town hall meeting in New Hampshire this week was devoid of the shouting and screaming that Democratic representatives and senators have faced in recent weeks. But the security and decorum of a meeting with the president is not enough to turn this around. It will take an approach that will somehow neutralize the town hall noise circuit, refocus the debate on the real stakes and solutions (including their social and economic costs), and offer reassurances that progress will not be made at the expense of those who are satisfied with their healthcare protection.

The key issue that must be addressed is accessibility, meaning insuring the 47 million who aren’t currently covered while not putting those who have access to insurance at risk. Another will be to ensure quality care and guarantee that patients are not inhibited in their choice of doctors and care. Dealing with rising costs in a sluggish economy will also have to be addressed; otherwise, the reform will either fail or be cosmetic in scope. In terms of the measures proposed, the question of providing a public option or expanding a newly-financed Medicare program will have to be tackled. Reforming existing private health insurance programs with respect to their policies on pre-existing conditions and portability should also be the subject of contentious debate. All this to say that the process will continue to be complex and we can expect the proponents of the status quo and the special interests to be as ferocious as ever. This could be the biggest test of the Obama administration in its first term. Will he be up to the challenge?

Barack Obama owes his success as much to his obvious skills and talent as to his recuperative powers. Throughout his political career, Obama has always generated some interest and curiosity, but he never starts ahead of the pack.When he does take the lead, he has been known to fall behind, only to somehow recover later on. In the race for the Democratic nomination, Obama lagged behind Hillary Clinton for all of 2007 and for a short spell in March and April of 2008. In the presidential campaign, his performance in the early part of September was grounds for concern. Yet, at a crucial moment in mid-September, he clearly outperformed John McCain when it came to response and temperament. More recently, following his initial misstep in the Gates-Crowley affair, he was adept in reversing course with his “beer diplomacy.” We should not underestimate his capability to adjust, reset, and recoup the advantage in the healthcare debate.

Throughout the healthcare turmoil, Obama’s approval numbers have remained mostly steady at 53-54 per cent. What is most reassuring for supporters of the Obama reform package, though, is the president himself. As he has said, he is not on a 24-hour news cycle and poll numbers will not be his chief concern. Even in the face of adversity, he appears calm and always in control. He has the numbers in Congress and, while he preaches bipartisanship, it is unlikely the Republicans will take the needed steps. So he will concentrate even more on the Blue Dogs, having amply demonstrated to liberal progressives that they will need to compromise or they will get no reform at all.

Obama is right to say the process has never been so advanced, and it is clear he has been engaging in some LBJ-type cajoling behind the scenes in recent weeks. Despite the opposition, it is fair to say that the alliance for change is stronger than it was in 1993. This is where Obama has played a significant role. Most important, though, Obama has an intangible quality that may do more than anything else to carry his healthcare reform across the finish line by late autumn: his ability to recuperate when he loses ground.