Of meat, beer, disease and death 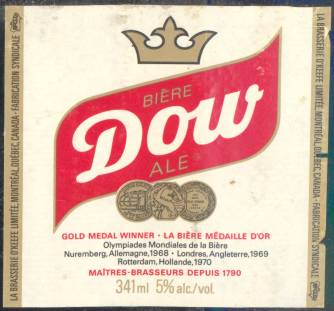 All this chatter about meat recalls brought a waft of sudsy, luke warm nostalgia through the Maclean’s Montreal offices this morning. It wasn’t last night’s Mojitos, either – though if you can beat those at La Distillerie on Ontario street, I’ll eat my socks. No, Maple Leaf’s gigantic recall of its products after several deaths brought to mind a formally fabled Montreal staple: Dow Beer. And there are certain similarities between the struggling purveyor of deli meats and the long gone Montreal brewery.

Until 1966, the Dow Brewery had enormous market share in a province that, more than most in the country, liked a pint or seven before, during or after work. “It was omnipresent, like Coca-Cola is now,” remembered the late, great columnist, city councillor and lifelong enemy of sobriety Nick Auf der Mar in 1987. Part of the beer’s charm was the abundance and consistency of it head – the result of a cobalt additive with which, as it turns out, the company was a little too generous.

Sixteen Quebec City-area men died of cardiomyopathy, a degeneration of the heart muscle. Beer, doctors surmised, was the culprit, and for months rumours swirled about the type that had poisoned the poor lads. In a bid to, uhh, quench the hysteria, Dow temporarily shut down its Quebec City plant and dumped all its vats into the St. Lawrence. Dow then returned to the shelves, sans cobalt.

It wasn’t enough. The beer went from popular to pariah practically overnight. In November 1966, a Quebec doctor charged with the investigation concluded that a total of 25 people died – every one of them a heavy drinker, consuming at least eight quarts a day. O’Keefe bought the brewery in 1966 and let it die a slow death; it became the beer of drunkards attracted more by its low price than any sort of nostalgia. Dow ceased production in 1992.

I have no idea what the meat consumption equivalent of eight quarts of beer a day is, and realize that cardiomyopathy and listeriosis are two very different beasts. Maple Leaf, it’s also worth pointing out, has been forthright about the outbreak of listeriosis, while Dow remained silent only until it simply couldn’t. Still, it’s worth considering how quickly a company will succumb to a tragedy. You can clean the machines; it’s much harder to restore a brand.