A conversation with the best-ranked woman chess player 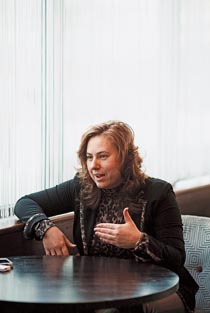 Judit Polgár is the best-ranked female chess player in history. Born in Hungary in 1976, she earned grandmaster status when she was 15. She has played, and bested, the likes of Garry Kasparov and Anatoly Karpov. She is now the only woman on the World Chess Federation’s top 100 players list. Maclean’s caught up with Polgár in London, where she was playing in the London Chess Classic.

Q: Are you nervous?

A:It’s not about being nervous. It’s about preparation.

Q: How do you prepare? Do you have a morning ritual before competitions?

A: Well, I wake up around 9:30 or 10 a.m. Then I go to the gym and have some breakfast. But then I’m preparing for my specific opponent. I study how he plays, his repertoire. You see, in chess we have styles—like in any other field. There are also fashions in the kinds of systems that people play. So I’m trying to know my opponent as much as possible.

Q: Are you superstitious? Do you need to eat the same breakfast every day before playing?

A:No, not really. I had some superstitions when I was little. And a winning pen is always a good thing to have.

Q: You’re often described as an aggressive player. Much has been written about your “piercing eyes,” and the way you stare down opponents. Is that accurate?

A: I started playing chess when I was five years old. I learned the moves from my mother, then worked with my father—and later trainers. My style became very technical. I sacrificed a lot of things. I was always hunting for the king, for the mate. I’d forget about my other pieces. Until a point it worked, and I won games that way. But later, when I started to play against the top-level grandmasters, there were times when I burned myself. And then I had to switch my style. But generally, I’m still an attacking player.

Q: These competitions must be old hat to you; you’ve been playing chess since the early’80s. Is the game still exciting?

A: Well, the game is changing. Especially in the last decade or so. In the old days, I would bring my notes travelling with me. I’d have 15 or 20 kg of notes. I had chess magazines and books—and I’d have to write down and memorize everything. Now, we all have laptops and computer databases.

Q: Does it feel different to play these days?

A: Before, we were using our minds and creating by ourselves. But for the last 15 years, we’ve been using analyzing engines. Every single person in the profession has an engine as a helper now. The engines contain six or seven million games, searchable by opening move, player, country, time control. That makes it possible to really research your opponent. Engines also calculate better and they don’t make big blunders. So big blunders are completely avoided. People have more self-confidence now, because they have an engine to rely on. The engines also give ideas. Because of that, the game has changed a lot. Chess still has its creativity, but it’s different. We have creativity to give guidelines to the engines on where to look for new ideas.

The last few years have been tricky. There are three or four or five different engines to train with, and each evaluates situations in different ways. So if you know that somebody is working with this or that engine, you can say: “Ah, he’ll probably go more technical.” So the preparations are on a really advanced level. That said, if you just rely on the engine, you might end up in a situation where, say, you prepare up to move 22—and then at move 23 you look down at the board and you don’t understand what’s going on.

Q: Are you nostalgic for the old days? You grew up playing against your father.

A: For some years I struggled to accept that I had to use engines and computers so much. Because one of the things I liked most about chess was the creativity—the chance to be original and unexpected, which is more difficult nowadays. But it’s just the way it is.

Q: Do you have a photographic memory?

A: Definitely. I do.

Q: A lot has been written about your childhood, and the way you learned chess. Can you talk about when you started playing?

A: I was five years old. I have two older sisters and they were already playing. I just wanted to do the same thing.

Q: Your sisters became professional chess masters. Were you competitive growing up?

A: Actually, we were never really competitive. We had a very special education, since we were all home-schooled. In Hungary in the 1980s, the Hungarian Federation was not very supportive of this. We had a lot of enemies. But we were very close with each other.

Q: You were home-schooled so that you could focus more on chess?

A: Yes. Actually, before he even met my mom, my father developed this idea that his children would not go to school. He wanted six children. And he wanted them to focus on one specific field. Well, after three children he stopped, but he still carried out the plan.

Q: Why did your father pick chess?

A:When Susan, the eldest of us, was 3½, she was already pretty good at chess and mathematics. My parents thought that it was better to focus on one field. They chose chess.

Q: In Canada, we talk about “hockey parents” relentlessly driving their children to succeed. I guess “chess parents” are the intellectual equivalent. Did your father push you hard?

A: My parents are extremely good pedagogues. They’re both teachers. So they knew exactly how to treat a child to make her motivated and happy. Chess was natural for me; I was extremely successful. In the mid-’80s my parents gave up their jobs so they could coordinate our training and travelling.

Q: I read that your home-schooling involved learning Esperanto.

A: Yes, we all learned it. I don’t speak it anymore. I didn’t practise enough. But Esperanto gave a lot to my family. We were very poor. Through Esperanto, my parents found friends. There were occasions when we went to a tournament, and people in the Esperanto community would give us a place to stay.

Q: Your father’s theory is that geniuses are made. Do you agree?

A:Generally, I agree. But talent helps.

Q: Part of your father’s thinking was that his daughters should not play in women’s leagues. You’ve actually never competed in the Women’s World Championship. Why?

A: Growing up, there was only ever one chess. Today, professional chess has an “open” section and a “ladies” section. And I always liked challenges. I was the No. 1-ranked woman since 1989. So I didn’t feel the need to compete in women’s leagues. It never felt challenging enough.

Q: It seems strange that men and women compete separately at all in chess, since it’s an intellectual sport.

A: It’s very hard to change traditions. If most women are supportive of it, then why not? They can be world champions and play in world cups.

Q: So you’re saying that women like having a separate league because it’s easier that way?

A: Well, yeah. And actually, I can’t blame them. I understand that—even though the women’s league is absolutely not the same level. It’s different, say, to beat the No. 1-ranked player, Magnus [Carlsen]—which I just did at a game in Mexico. But a win is a win, right? I think women know that if women’s chess were abolished, then suddenly they would be nowhere in the world.

Q: Is there something biological about it? Are women less capable in chess?

A: No, no. It has nothing to do with that. It’s society. Less than five per cent of registered chess players are women. When kids start playing chess—up to 10 or 12 years old—girls and boys are enrolled in equal numbers. Later on, it deviates a lot. The girls drop out.

Q: You famously beat former No. 1-ranked player Garry Kasparov in a match in 2002. Kasparov was long skeptical of female players—and once said that the “imperfections of the feminine psyche” would prevent a woman from dominating on the chessboard. You must have felt vindicated when you won.

A: (laughs) Well, Kasparov wasn’t the only one.

Q: Did he apologize?

A: I think there are some people who never apologize. But later he accepted me, by talking with me as another serious chess player. I later trained with him.

Q: You have two children now. How has that changed your career?

A: I’m still playing chess, but I do too many other things to be competing at the highest level. I organize a chess festival in Hungary. I support chess in schools, and I have my own chess foundation. And I started writing books.

Q: Has your sense of competition dulled?

A: To lose is miserable. It’s a bad feeling. You can’t get used to it.

Q: Are your children playing chess?

Q: Will they be professional players?

A: I don’t think so. But I’m happy that they play because I do believe that chess is good for children.