On the ‘mosque’ at Ground Zero

A modest proposal to end the debate 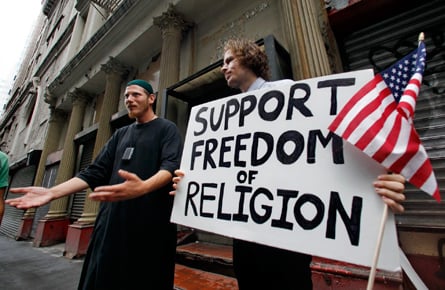 Wanting to grasp a firsthand understanding of the debate surrounding the Park51 Muslim community centre (a much more accurate term than a mosque), I visited the site and was greeted by two young pro-mosque demonstrators arguing in favour of religious tolerance and First Amendment rights. They were articulate, passionate, and answered all my questions. Mayor Michael Bloomberg, a leading supporter of the project, would have been proud. Gradually, opponents began to show and peacefully voiced their displeasure with the project. Meanwhile, some of the faithful were praying inside the existing building.

I then made the two-block walk from the Park51 site to Ground Zero. Let me point out that, from the site itself, there is no direct view of Ground Zero. Even once constructed, there would be no direct view of Ground Zero, even from the roof. When you walk to the closest intersection, heading west to Barclay street, you arrive at a corner where you can see construction cranes at Ground Zero. It is at this point that you grasp the proximity of the proposed project and you can better comprehend the opposition to the project. But you can also readily understand the dilemma facing not only New York City, but all of America. The issue is no longer local and it may even have global ramifications, as people everywhere have come to be interested in how the battle plays out.

The debate has heated up recently with Barack Obama rightly intervening in defense of constitutional principles and values, New York Governor David Paterson trying to find a compromise between constitutional rights and the sensitivities of 9/11 victims, and politicians from both major parties trying to seek political advantage or political cover. The spectre of Islamophobia is now the subject of numerous newspaper articles and magazines covers. Polls are showing growing opposition to the community centre, both in the country and in the city, and some individual construction workers have voiced their reluctance to work on the site. Union leaders, dealing with an anemic economic recovery, are avoiding all comment, but there’s a clear discomfort.

The promoters of the project have every right to move ahead, but their opponents seem to have the edge in organizing a resistance that may not be in the spirit of the constitution, yet is legitimate in its own way. Supporters are correct to argue that the War on Terror is not meant to be a war against Islam and it was not Islam that destroyed the twin towers—it was Al Qaeda, using Islam to justify terror. But having spoken with those who lived through 9/11, it is clear the wounds have not healed. To many who lost loved ones (and some were of the Muslim faith ), Ground Zero is sacred shrine. Some remains were never found.

Obama, Bloomberg, Republican Governor Chris Christie of New Jersey, and many others including prominent local faith leaders are on the right side of this issue. The U.S. has gone to war and lost so many loved ones in the defense of liberty and the values that emanate from their Constitution. But sometimes time has a way to lessen the pain and open the way to a reasonable accommodation—a familiar term to Canadians—or, better still, understanding and acceptance. A recent article in the New Yorker related how some American Muslims feel about the growing controversy. The views were not unanimous. Some fear the controversy is being used to prevent the building of other mosques elsewhere in the United States, while others are concerned about extreme statements by mainstream opponents like Newt Gingrich, who clumsily compared Islam to Nazism. Many see it as a test of acceptance and integration within the American mainstream of life.

Maybe it is time for an old-fashioned time out. The solution should ultimately be local and possibly incremental. For instance, the project could be repositioned as an interfaith community center with a mosque included and construction could be delayed until the memorial at Ground Zero is completed on the 10th anniversary of the attack. Such a proposal would be consistent with the basic Constitutional principles that allow the project to go forward and may help solve the dilemma at Ground Zero.