In conversation with Ken MacQueen 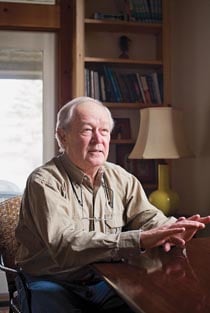 Jim Sterba is a veteran foreign reporter at the Wall Street Journal and one-time war correspondent, but his latest book, Nature Wars, is about insurgency of a different sort: the resurgent population of North American wildlife and the uneasy relationship with its neighbours. Both humans and overabundant populations of deer, bear, goose, beaver, coyote and others have taken to suburban life with sometimes disastrous consequences. “We turned a wildlife comeback miracle into a mess” of fouled parks, deer-vehicle accidents and downed jetliners, he writes. He argues our Disneyfied view of animals has tipped the balance of nature.

Q: I live in British Columbia, where trees are sacred and we love our wildwood creatures. Each has their own special interest group. Yet you say we have too much wildlife.

A: Certain species are over-abundant, like white-tail deer in many parts of the country. Some are just nuisances, like Canada geese. Some are damaging, like beavers. The problem with bears is that people have such an anthropomorphized view of them because they haven’t been around bears a lot, except teddy bears, so when a bear shows up they think, “Oh, it’s a cute little person,” and they throw it a doughnut, or they let it rifle through the garbage can and take its photograph, and the bear begins to associate the smell of people with food, not fear. It’s not the bear’s fault, it’s our fault.

Q: We love our wildlife in theory, but in practice we don’t understand it very much, do we?

A: The last third of the book talks about how over the generations we’ve become detached from nature, kind of de-natured in that we’re not out on the working landscape anymore. In the 19th century, two out of three members of the workforce were working outdoors on farms. Now it’s less than one per cent. We spend 90 per cent of our time indoors, in our cars, offices or homes. We’ve been getting our nature as we moved off the landscape, the working landscape, indirectly from books, from movies, from TV, now digital images.

A: Long before Disney there were all these anthropomorphized creatures in films. The guys who sold the films said, “We’re interested in sales, not realism,” so they created all this stuff that is laughable now. Then Walt Disney came along. Bambi is this anti-hunting classic, but it also reinforces the notion that when man goes out into nature, nature loses. Man is the bad guy. Man is not the ecosystem manager that he should be. That may be true, but there are still situations where we as a keystone species need to do some things for the health of the ecosystems we live in, for the good of the plants, animals and the people who live in it.

Q: You talk about how hunting, for deer especially, is so heavily regulated, and I would say in Canada hunters are practically social pariahs. And yet in the U.S. there was an astonishing figure in your book: there are 3,000 to 4,000 deer vehicle collisions a day.

A: It’s not only deer. There are millions upon millions of creatures, birds and small animals that we run over and we don’t think about it except as a kind of ghoulish joke, roadkill. I talk about Canada’s [wildlife] underpasses and overpasses to try to reduce that carnage on the roadways, but that’s an amazing toll. The thing about deer car crashes—and worse, moose car crashes—is that virtually all those deer die, and upwards of 250 people die and 30,000 get hospitalized [a year]. There’s something called a social-caring-capacity tipping point, beyond which the good of the animal begins to be outweighed by the problems it’s causing in the minds of the people who are having to deal with it.

Q: In Interior British Columbia the deer have become so bold that they are wandering around communities and attacking dogs, even people. There was a movement to cull deer, but then something called the Inverness Deer Protection Society launched a lawsuit. Among other things it seeks damages because a deer cull was causing members of the society mental anguish.

A: The same thing is happening now in Rock Creek Park in Washington, D.C. There are so many deer they’re completely eating away the plants and shrubs—three times more deer than the foliage can stand. They put together a 600-page environmental impact statement. Must have cost millions. Took 10 years. They were on the verge of culling the herd this winter when a California-based animal rights group—California has no white-tail deer—sued on behalf of about five Washington residents who said they would suffer irreparable mental anguish if the deer cull went on. People divide up into what I call species partisans.

Q: Species partisans are generally defending deer, wolves, beavers or baby seals—generally the cute or noble beasts. I’m not seeing a big pro-rat lobby out there.

A: What animal protection people say is that if you kill out your problem beavers or your geese or your deer, or if you move them or do anything to eliminate the problem, you’re creating a vacuum effect into which new members of the same species are going to come. But studies that have been done into deer culls have found after six to eight years the deer population has not increased other than that the deer that are left have fawns. The logic of the vacuum effect is this: why pull the weeds in your garden? New ones are going to grow back. Why trap the rats in your basement? Because you’re managing that landscape. On family farms, predators were controlled because they would damage the things you were trying to grow. Now the landscape is full of trees and people that don’t manage. I’m not saying we shouldn’t have any wildlife around, I’m just saying people ought to know the consequences of their little management regimes. We’re already in the landscape and yet there are so many people who say, “Leave nature alone. Nature will balance itself. Nature will solve its own problems.”

Q: The front page of Vancouver’s Province newspaper today talks about the need to cull tens of thousands of snow geese, clustering in Richmond, decimating playing fields and parks. It’s also the location of Vancouver International Airport. There are consequences to geese overrunning airports.

A: It took the U.S. Fish and Wildlife Service 10 years to change the rules on culling geese. They were fought all the way. It took U.S. Airways Flight 1549 about 90 seconds to cement the notion that maybe something ought to be done [after a collision with a flock of Canada geese disabled its engines]. Something that I think about every time I get on an airplane.

Q: I live a 15-minute drive from downtown Vancouver. I’ve had a bear picnic on our front lawn, we’ve had raccoons in our attic and this week I almost stepped on a skunk getting out of my car. Your book spoke to me.

A: This is a problem of riches, a problem of success. Our patch of the planet is really blessed to have all of these trees and all these wild birds and animals. It’s the result of things we did to get them, nurture them and keep them. Parts of the world would envy what we have. It’s very likely in this part of the eastern United States, which contains 60 per cent of our forest and almost two-thirds of our population, we are living in closer proximity to more wild birds, animals and trees than anywhere on the planet at any time in history.

Q: There is a lot of greenery around your weekend home in rural New York state. Isn’t dealing with wildlife the price of admission?

A: Absolutely. If you don’t have any problem with these critters, I think they’re fun to have around. I gave up hunting when I went to college in Michigan about 40 years ago. Since I’ve been coming up here I’ve taken it up again. I think of myself not as a deer hunter but sort of an ecosystem manager.

Q: If you follow the arc of wildlife population growth of past decades, where is it going?

A: Maybe that’s my next book. Sorry to cop out. There are some solutions. If you don’t want to use phrases like killing or culling or any of these other euphemisms, you can use what my deer consultant calls “human-directed mortality.” We’re a keystone species. Like beavers we can engineer our landscape for whatever we want. It depends on how badly you think the species that are overabundant are causing problems. If it’s just a messy golf course, you might be able to tolerate geese. If your water well is flooded by a beaver and your water is contaminated, you may want to get rid of the beaver.

Q: What is the reaction to your book. Is it considered heresy by some people?

A: I’ve gotten [heat] from goose people in New York City who believe that killing geese is like the Holocaust. Tell that to Holocaust survivors and historians. I was trashed by a feral cat protector. In the book, I don’t say I want to kill stuff, I just quote other people saying this is an option. At all the talks I give, everyone has a problem. Everyone has an opinion and has taken a side on the issue. I think this book is timely because everyone is sensitized to the issue.