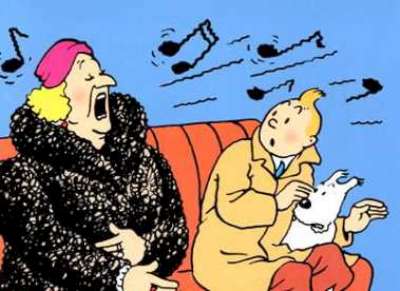 Pauline Marois (not exactly as shown) addresses the voting public.

*… from gasoline. A péquiste government, Marois declares, will ‘liberate’ (har, har) Quebec from its dependence on oil in ten years.

I’d love to say that this is a JFK-man-on-the-moon type declaration, in which a politician boldly enunciates an impossible dream, thereby igniting a nation’s imagination so that this dream may become reality. If this is the case, she chose an interesting venue indeed: Camp Edphy, a summer camp in the Laurentians where, coincidentally enough, I was once physically assaulted by a horse.

Big ideas need to be fleshed out: How will the PQ get Quebecers’ rear ends into hybrid cars? What sort of tax incentives will be offered for homeowners to switch from oil to electric heating? What in God’s name will be done with Bombardier Recreational Products, the Quebec-based manufacturer of four wheelers, Sea Doos and the like – machines for which Quebecers themselves have a voracious appetite? Don’t look to the PQ’s website for answers. The biggest news on the site right now is Marois’ outrage at how Quebec’s athletes can’t display Quebec’s flag at the Beijing Olympics.