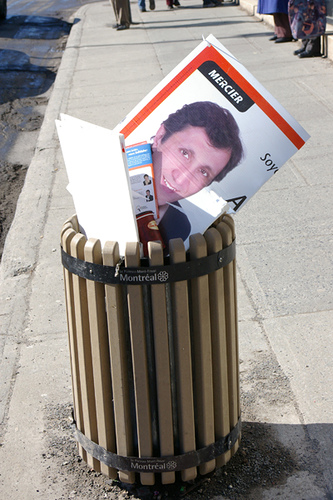 So imagine you’re Amir Khadir, the first member of your lefty, sovereignist party to be elected Member of the National Assembly. Happy times, yes? Not only that, you won over a well-entrenched péquiste–essentially beating him at his own game. Ah, sweet. Also, one of your first decisions as an MNA was to throw a shoe at  a poster of George W. Bush. In any other party would have been a ticket to the back benches if not worse, but in your party pushes you a little closer to sainthood. (Secular, bien sûr.) All’s swell so far.

So imagine, then, that instead of attending your party’s first convention, where you could basically ride in on a chariot and bask in the glory of these very impressive feats, you decide to go to leave the motherland to attend a wee party honoring fellow Canadian politicians of Iranian descent. In Toronto, no less. Prior engagements, and all that.

There’s a joke in here about political judgement, but I can’t quite put my finger on it.