Pundit round up: Who will replace the Ontario premier?

Speculation begins in the hours after Dalton McGuinty steps down 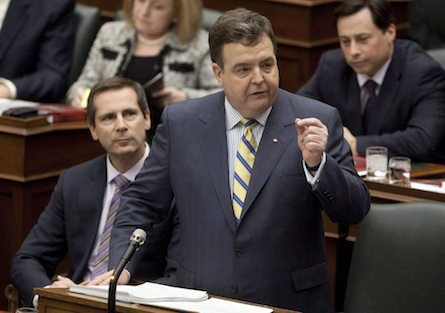 The dust has settled after Ontario Premier Dalton’s McGuinty’s surprise announcement that he is stepping down to make way for a leadership race and pundits are weighing in on who will lead the Liberals and why the premier left.

The Globe and Mail’s Adam Radwanski pontificates on who will be the next in line. Kathleen Wynne, current minister of Municipal Affairs and Housing and Aboriginal Affairs and former education minister, could be a good choice to appeal to unions. Health Minister Deb Matthews is a likely candidate, but she has been dogged by ongoing problems with Ornge air ambulance. To represent business interests, Finance Minister Dwight Duncan would be an excellent candidate, but he has vocally said he isn’t interested in the position. Or, will it be someone new? Say, current Liberal Party President Yasir Naqvi, or another up-and-coming MPP.

Also at the Toronto Star, Tim Harper points out that there are seven current, or upcoming, Liberal leadership races in the country at the provincial and national levels, pointing to a party very much in flux. “The McGuinty resignation means the top Liberal job now seems to be open everywhere, including the two largest Canadian provinces and the federal level.”

The National Post’s Kelly McParland writes that McGuinty leaves a dubious legacy for whoever the next leader may be. He points to an “economy in lousy shape,” a deficit triple what it was when the premier came into power and souring relations with unions that once supported the Liberals. “Whoever the Liberals ultimately select to handle this mountain of messes in Mr. McGuinty’s place will have to wonder whether it constitutes a blessing, a vote of confidence, or a sentence to the firing squad.”

Toronto Star Queen’s Park columnist Martin Regg Cohn also says it will be a tough slog for whoever wins this winter’s Liberal leadership race. “For the winning candidate, it will merely be a prelude to the inevitable demise of this Liberal minority government and a spring election that will turn Ontario upside down.”

The Toronto Sun editorial, however, says that McGuinty’s departure bodes well for the Liberals. “That said, by resigning now, McGuinty has given the Liberals a fighting chance for political revival, given that he became the lightning rod for the public’s anger at his government.”

Ottawa Citizen columnist Joanne Chianello writes that McGuinty was often a surprising premier and this decision is just another surprise in his career. She points to the southern Ontario gas plant cancellations and ugly labour disputes as likely reasons for the premier’s hasty departure. “He likely saw the moment as his last chance to depart before fellow Liberals began to second-guess him as they head into an election the Liberals look hard-pressed to win,” she writes.

In a guest column for the Ottawa Citizen, University of Toronto political science professor Peter Loewen says McGuinty’s decision to suspend legislature is “no way to end a career in politics.” Loewen notes that the premier can now negotiate with teachers without scrutiny, and he also avoids all the criticism that has dogged Energy Minister Chris Bentley about the cancelled gas plants. “Such accountability is not a mere inconvenience, nor is it some nicety. It is the core of our system of responsible government. McGuinty considers it an nuisance to be ignored in his final months,” he writes.

National Post columnist Matt Gurney points the finger at the power-plant scandal as the real reason for the premier’s hasty departure. “No matter what Mr. McGuinty said, and what Liberal spin doctors will say in the days to come, the truth of the matter is that Mr. McGuinty stepped down because his party’s power plant shenanigans simply weren’t something that could be explained away.”

And, in a guest column in The Globe and Mail, former Liberal advisor John Duffy writes that the premier saw that he needed to use his “choose change” campaign slogan one last time to move a stalled legislature forward. “The minority parliament elected last October 11 had degenerated from uncertainty to unworkability,” Duffy writes.