Why our severance laws need to change 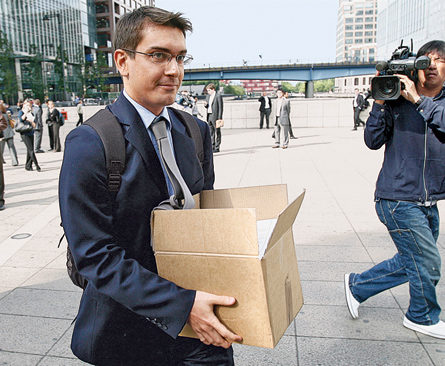 On Nov. 12, media giant Canwest Global Communications let go of 560 employees. Across the Canwest empire, unsuspecting workers were called into boardrooms, tables thoughtfully furnished with boxes of tissues, to be given the bad news. As the law requires, Canwest offered severance pay. Many were reportedly offered salary continuance for a limited period, the length of which depended on how long they’d worked for the company. A lump sum upfront was not on the table. Anyone who refused the offer would almost certainly have to hire a lawyer and fight it out. For the most part, the freshly axed employees weren’t up to it. They took what promises they could get, and left.

But the bad news stories didn’t stop. Canwest was in big trouble. It needed to refinance massive debt, and might not be able to do it. The company might soon be in breach of loan covenants. Its share price had plunged. Creditors were circling. A filing under the federal Companies’ Creditors Arrangement Act (CCAA) might be inevitable. (No filing has yet taken place.)

The CCAA offers court protection to a company in financial difficulty, so it can reorganize and stay in business. (It’s not the same as a bankruptcy filing, under the Bankruptcy and Insolvency Act, which generally leads to a company’s dissolution.) While a company that has filed under the CCAA attempts to revive itself, creditors cannot enforce their claims. That includes ex-employees entitled to continuing severance payments; in CCAA proceedings, they are just ordinary unsecured lenders who must wait a long time with the unpleasant prospect of getting little or nothing, as Nortel Networks employees recently found out. Meanwhile, savvy banks and other commercial lenders, with their loans typically secured, protect and enhance their position. Many consider this fundamentally unfair.

When banks lend a company money, or financial professionals structure a bond issue for sale to the public, they negotiate complex terms with the borrower. Security will likely be demanded; promises about financial performance will be extracted; the consequences of breaking those promises will be severe. As part of this process, lenders assess risk, including the risk of insolvency or bankruptcy. The greater the perceived risk, the stricter the lending terms. If a lender thinks a borrower is shaky, the interest rate demanded for the loan will be higher. Professional lenders know how to protect themselves.

Ordinary employees don’t behave the same way. They are unlikely to have the skill or knowledge needed to assess insolvency and other risks. Even if they do, they won’t have any real opportunity to negotiate a higher salary to compensate for risk (except, perhaps, in the case of very senior executives). If you’re looking for a job, it’s probably not a good idea to tell the person on the other side of the desk that you think his company may go belly up and that you want more money before you enlist. Prospective employees can’t, and don’t, think that way.

Yet both the CCAA, which is a big bank, and the out-of-work little guy who used to be on the assembly line and is now owed severance, are treated the same way. They’re all just creditors together. Except, of course, that commercial lenders, advised by high-priced lawyers and accountants, are likely to have security for their loans, and will collect ahead of the hapless unsecured worker

Employees do get some special consideration when a company goes under, but it is very limited. The recent federally funded Wage Earners Protection Program (WEPP) guarantees payment of up to about four weeks of wages and vacation pay—to a maximum of $3,253—when an employer declares bankruptcy or becomes subject to a receivership. But it does not cover severance pay, and does not apply to a CCAA filing. The 2009 federal budget extends the WEPP to cover severance pay, but only for bankrupt companies or those in receivership, and only to the four-week maximum; inexplicably, it fails entirely to address the CCAA problem.

One fix is for judges who issue the stay of proceedings that follows a CCAA filing to exempt severance pay from their order. They have the discretion to do this if they wish; they should be encouraged accordingly. But to rely on judicial discretion is iffy. A better solution is to amend the CCAA to give priority to severance pay (up to a relatively modest dollar amount per employee, to prevent senior employees feathering their nest by negotiating handsome exit packages before a filing). Some object that to put employees ahead of banks may inhibit commercial lending, or make it more expensive to borrow, neither desirable at the moment. Others believe that, for once, ordinary employees should come first; it’s a reasonable trade-off, they say. After all, the man on the assembly line never hurt anyone and is not well equipped to protect his interests. And we should remember that the main point of severance is to give the recipient time to find another suitable job, something that’s in everybody’s interest.

The history of amending the CCAA is not encouraging. The process has been cumbersome and slow, with many amendments passed by Parliament inexplicably still not in force. But, in these harsh economic times, with important companies in serious trouble, and an army of the unemployed and aggrieved on the move, full protection of severance pay owed to sideswiped workers has political traction.