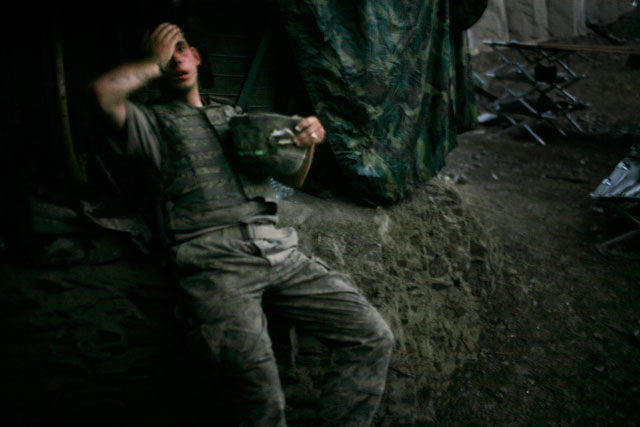 At one point in Restrepo, a new documentary about a US platoon holding a small outpost in the Korengal valley in Afghanistan, one  soldier talks about how, when it comes to the ultimate buzz, nothing beats getting shot at. Forget about bungee jumping, skydiving, rock climbing, or any of that civilian stuff, combat is where the real rush is.

It reminded me of the scene in Generation Kill when Trombley sits out in the open as they’re taking fire from a heavy gun, and afterward tells Colbert that deep down, he really wanted to know what it is like to be shot. It wasn’t the only time during Restrepo (made by Sebastian Junger and Tim Hetherington) that I thought I was watching Generation Kill. Both are grunts-eye views of a war (Iraq, in the case of GK) that largely ignores both the broader strategic military significance of what they are doing as well as the political issues that frame the war itself.  But in Generation Kill, the audience has an advocate in the form of Evan Wright, the embedded reporter whose job it is to ride along and occasionally lob political questions at the soldiers. The fact that they don’t care isn’t really the issue.

But the filmmakers play no analogous role in Restrepo, though it isn’t clear whether that is because Junger and Hetherington never asked the soldiers for their thoughts on the war, or they just didn’t include the footage in the final cut. Either way, what we’re left with is a thoroughly apolitical look at the war in Afghanistan, following a small group of soldiers into what became known as the “Valley of Death.”

The film alternates between extremely raw footage from the combat outposts and interviews conducted with the soldiers in Italy shortly after their deployment has ended. The footage is incredible. The cameramen were almost always in the thick of it, standing beside or just below the soldiers as they went on patrol, conducted shuras, and fought off Taliban attacks.

There are two truly jarring moments in Restrepo. One is when some villagers come to the outpost to ask for compensation. The soldiers have killed one man’s cow, apparently after it got caught up in concertina wire. The villagers ask for $400 in compensation, and are offered a few bags of beans and rice. When they insist on payment, they are essentially told to get lost. Given the precarious nature of their situation and the broader desire to win hearts and minds, the callousness is only surprising the first time you notice it.

The second occurs during a three-day sweep they conduct deep into the heart of Taliban country. The platoon is ambushed from all sides, and in the gunfight  one of the best soldiers in the group is killed. Another soldier completely loses it, starts freaking out and crying. You can see the other soldiers trying to keep their wits in the face of contagious panic – I’ve never seen anything like it before, and it really, really chilled me.

But notwithstanding the fact that the platoon had clearly had enough of Outpost Restrepo by the end of the tour, and despite the fact that many of the platoon were clearly suffering from PTSD, it is never clear that any of them seriously regret the experience. Just the opposite: the overwhelming message of Restrepo is the same as that of Generation Kill: A great number of men very much enjoy war. Not for the combat necessarily, but for its role in forging the deepest personal bonds a man can have. Again, as a minor character says in the last episode of GK, as they are winding down in Baghdad: What could be better than sitting around dipping tobacco, lifting weights, and hanging out with the best dudes in the world?

The same homoerotic tension running through GK is present in Restrepo, as a few dozen fit, handsome, tattooed young men lounge around, oiling their guns, wrestling, and playing grabass. That is why the most telling scene in the entire film is a staged little bit when three of the soldiers get into a cramped bunkhouse and crank the song “Touch me, touch me (I want to feel your body)”. They dance together for a few moments in genuine Platonic ecstasy, then head off, laughing.