REVIEW: Death in the City of Light: The Serial Killer of Nazi-Occupied Paris 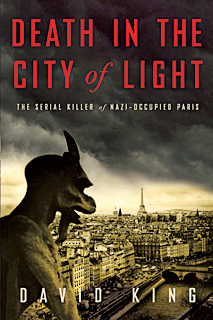 It would seem axiomatic that a city under brutal foreign military rule would at least be an orderly one, with crime as repressed as every other aspect of life. Not Paris in early 1944. There, life under Nazi dictatorship made for a perfect ecological niche for a serial killer. For years, thousands of people had simply disappeared, some to safety but far more to concentration camps, and no one asked questions of the authorities. In March 1944, it took five days of warm weather and open windows before neighbours complained of the noxious smoke pouring from the chimney of supposedly empty 21 rue Le Sueur. When police entered it was into a charnel house nightmare: a basement lime pit full of dozens of decomposing bodies and, in the furiously burning furnace, a smoking hand.

When the owner, physician Marcel Petiot, showed up, he asked one of the cops waiting for higher-ups if he were “a true Frenchman.” When the officer replied yes, Petiot told him No. 21 was a Resistance safe house and the victims collaborators. The patriotic officer let Petiot go, and the killer escaped arrest for over seven months. (In the confused days after the August liberation of the city, Petiot managed to join the police under an alias and spent some time investigating his own crimes.) Meanwhile, French police authorities assumed they had stumbled into a Gestapo torture chamber.

What had actually been going on at 21 Le Sueur was a crime that could only have been committed under Nazi occupation. Petiot had been running a fake escape line for the Third Reich’s endless list of enemies, one that mimicked—in its demand for total secrecy and trust—the real ones that funnelled refugee Jews and downed Allied airmen into Spain. Except Petiot took those desperate people to his house and murdered them, taking their last valuables for himself. In the whole appalling story, expertly told by King, that cruelty stands out the most.

FILED UNDER: books David King Death in the City of Light WWII