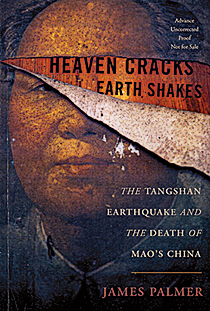 The Chinese have many sayings about heaven and earth, and the relationship between divine and mundane order. One of them is encapsulated in the title that Palmer, a perceptive British writer living in Beijing, gives his study of 1976 China, the year the bloody chaos of the Cultural Revolution finally ended. With Mao Zedong on his deathbed and his would-be successors jockeying for power, Chinese heaven—political and social order, in other words—was metaphorically cracking. And then the Earth literally shook. On July 28, a quake flattened the city of Tangshan and its outlying villages, killing half a million people in perhaps the deadliest 23 seconds in human history.

The era’s corrosive politics had even seeped into earthquake science. Weeks before the disaster, Chinese seismologists, alarmed by warning signals in the region—a drop in the water table and high levels of radon in the water—were attempting to get national officials’ attention. But they were hampered by the fact the Communist party’s man at the seismology bureau, their pipeline to the country’s rulers, had just been denounced as a “capitalist roader.” It’s doubtful, though, that any warning could have saved many from a quake that struck at the worst time (the middle of the night) and worst place possible (directly under a city of one million).

It was the aftermath that enraged the populace: the panicked militia shooting “looters” (people trying to find food in public granaries), the refusal of foreign help, the concentration on Tangshan city (some villages received no aid for months). The Communist state’s inept and callous response proved too much for a population already boiling over in resentment at the Cultural Revolution’s excesses, and 1976 became the revolutionary year in which China began its transformation into a modern superpower. And in his epilogue, Palmer nicely captures just how far China has come over the last 35 years. Today’s Beijing is rife with Cultural Revolution kitsch, including theme restaurants with singing waiters dressed as Red Guards, who address delighted diners as “comrade,” now a slang word for “gay.”